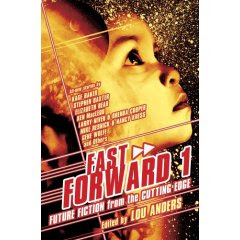 That seemed like a good title for a novella, especially since superstar editor Lou Anders was putting together an anthology called FAST FORWARD 1.

I wrote the novella; it's in the book. Comes out early next year. 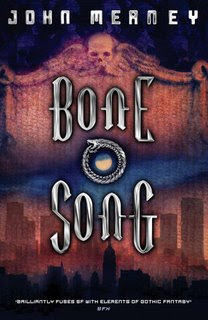 ...the bones? You will when you read Bone Song. And you may continue to hear them forever. I hope...

The sequel is called Black Blood. Ya heard it here first. (Of course, I announced Bone Song by a different title to begin with.)

I remember the time I lifted my eldest nephew James under my arm, and pretended to stuff him into the boot of my car. Now, as a rugby player and serious weightlifter, his arms are bigger than my legs and he can lift me under one arm... and his younger brother Lloyd is headed in the same direction.

And my favourite neice, Emily, has escaped from the secure psychiatric wing -- um, where she fixes patients' minds, I should mention -- and she's picked the wedding dress for January. Her other half, Michael, is a grand chap.

Life is wonderful, ain't it? And the future hasn't even happened yet.