...and I can't remember whether that was Oxford or Tristopolis, but last week I was messing around with computers (or rather, computing ideas) in the university, followed by a lightning trip to Wales (with Yvonne driving through the night) to get to our neice's wedding. Emily Benbow, my favourite neice, has transformed into Emily Hill, and her husband Michael is the best. Good fortune forever, both...

And Yvonne's famous! She appeared in yesterday's Times, telling the world the truth about Paul McKenna's system, and how miraculous the changes are. Some people would say you can change in an instant because you already have all the resources you need inside you... and one of the people with that opinion is Paul himself. I've a story to share with you, about how to daydream a novel into existence to order, which is something exceptional... coming soon. 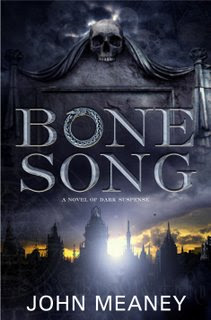 ...or I was confused, in search of an identity, until I came to terms with my transatlantic tendencies...

The primary setting of Bone Song, coming very soon in March, is a dark Gothamesque city called Tristopolis. Beneath a perpetually dark-purple sky, the skyscraper towers rise hundreds of storeys above the streets where purple cabs move. Gargoyles move among those towers.

Elevators are powered by imprisoned wraiths. All energy from the city comes from the reactor piles in which are stacked the bones of the dead, where necroflux builds up in resonant cavities and the overlaid agonies of the bones' memories are a small price to pay for civilization... Maybe.

And I've also described the book as L.A. Confidential with zombies, which it is, kind of. Or maybe a lot.

So it's the kind of book that lends itself to a transatlantic style, which suits me greatly. Having just corrected the galleys for the Gollancz edition, I am hugely pleased with the look'n'feel of the book. That's all polished and nicely put to bed, so you'll be reading it soon!

Still, the book uses turns of phrase that might be perfectly evocative to a Brit, but mean little on the other side of the pond. So I've done a US translation for my new publishers there, Bantam. (I've been published by Bantam before, but that was the UK company. Confused? That's fine.) Anything that doesn't ring true, it'll be my fault.

And 'storeys' becomes 'stories' in the States, 'span' becomes 'spun', and don't get me started on 'realize'... Actually the real differences are phrases like 'wind up' in the sense of winding up a person, and 'cracker' applied to a gorgeous woman, and... oh, you know. Like that.

The German translation isn't anything to do with me, though. I speak the language well enough so that I can travel in Germany without having to lapse into English, but translating my own book is beyond me. The book is called Tristopolis (German publishers never translate book titles verbatim), and the cover is great, don't you think?

I spent a while in Zurich during November. They speak German, in the same sense that Glaswegians speak English. I like Switzerland. Where else would you see guys with long hair and ear-rings, dressed in camouflage and carrying automatic rifles while standing on a station platform, waiting for a train? (That wasn't this trip, but one of my previous adventures.)

Speaking of travelling, I also had a nice time in New York for a couple of weeks back in October/November time. Remiss in my blogging, have I told you about Halloween in a karaoke bar off Broadway with a bunch of Random House editors? And Hal Duncan singing David Bowie?

I also took a trip down to Austin, TX, to take in World Fantasy, at which I had another nice time and got to meet up with my bro, Colm, who travelled across the desert on his Harley to rendezvous with me.

The unofficial city motto is: Keep Austin Weird. I liked what I saw of the place. I didn't get to see the vast colony of bats that rises every night... That'll be another trip. 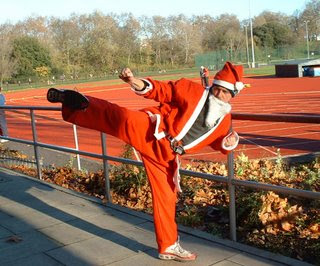 ...is deadly, as you can see. This was after the Santa Race in London's Battersea Park. Yes, there were hundreds of running Santas, Yvonne and me among 'em.

Afterwards, I stretched out and messed around a bit, as you can see. In the background is the running track of the park's athletics club. Yvonne and I went in there to chill out (actually to warm up with some hot chocolate) and came across Olympic gold medallist Daley Thompson, there to coach some of the young athletes. Blimey.

At some point, before the race began, this cry went up: "There's a naked Santa!" The lady runners flocked to see the guy: red hat, white beard, furry thong and running shoes... And yes, he ran the whole race like that. Yvonne has photographic evidence, but this is a family blog, or might be, so I'll leave the images unposted.

Early Boxing Day morning (the morning after Christmas, for the US readers) Yvonne and I ran a windy five-miler along the Welsh coast, at Porthcawl. It was bracing. Yvonne wore her Santa hat but otherwise normal running gear. 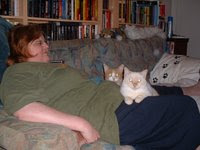 FROM JABBA THE HUTT...

...to Lara Croft. That's how I've described Yvonne's transformation during the past year, as me missus utilized Paul McKenna's weight loss system to lose over 6 stone ( nearly 90 lbs) effortlessly over 8 months, with no binging (since it ain't a diet).

From no exercise at all (December 2005), she went to... well, take a look at her in her party gown (for Paul McKenna's Xmas party), and finishing the Cardiff half marathon back in August. She's run a bunch of other races, including another half marathon, in which she came first in her age category! 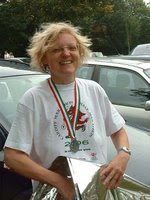 Yeah, I've run in some of those races as well. I like the hilly ones, but that's just me...