BOOTSTRAPPING THE MODEL
Chicken or egg, which came first?
Where do you check the spelling of a word? Where do you check its meaning? Being transatlantically bilingual, or aspiring to that state, I'll check the OED or Webster's, depending on context. But did you realize that every single English word is defined in terms of other English words?
Well of course you did. As a kid, sensory referents (perceived real objects) became attached to referential indices (words) in your mental model of the world, as you began to learn your first language. Something outside the dictionary kickstarted your language acquisition.
Have you ever tried to make sense of physics as a logical system, without applying intuition to any of its concepts? Honestly, you can't. There's no fundamental axiom from which the other relationships (equations) and concepts are constructed. Distance, time and mass are referential indices to proprioreceptive, kinaesthetic and visual sensations of real-world referents. They're concepts that we learn from outside formal physics; without them, the full richness of our model of the universe cannot come into existence.
If that doesn't translate into specific examples, think of simple relationships like force = mass x acceleration, work = force x distance, power = work/time. Now see if you can derive a meaning for any of the fundamental concepts from the whole collection of equations. Good luck, and you can't!
And yet, even though physics requires the basic concepts to exist a priori, our understanding of force, distance and time are very different now than a hundred years ago, before Einstein twisted our minds.
So while your unconscious mind processes that, here's my recent news. I handed in Dark Blood, the final draft, on time. That was a big rewrite draft, followed by some polishing up. In the last few days of the rewrite, I was working on it 24 hours a day, near enough. At least, every dream seemed to be part of the book.
Of course I took out a little time to exercise. On Sunday Yvonne and I ran a 10K race which was hilly. I was slow, but then again I'd run late on Saturday and very late on Friday, and the cat ate my homework. After the race, my legs gave way (as illustrated).
Now about that chicken. I'm thinking of the usual species, gallus gallus. According to wikipedia, there are several ways of hypnotising chickens. Trained in powerful hypnotherapeutic techniques though I am, entrancing chickens is beyond my experience.
And finally, the answer to the question of which came first. Obviously every chicken grows from an egg, so my answer is -- the first chicken appeared on Earth before the first chicken-egg.
Why do you think that is? And what do you think I mean by 'chicken-egg'? 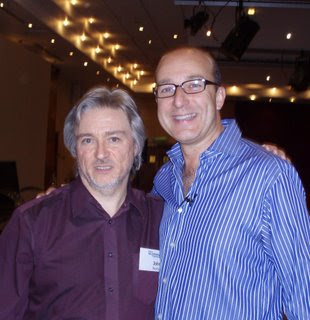 Of course, there are trends in SF. Once, there were novels about the next stage in human evolution. Van Vogt’s Slan was a real paranoid adolescent’s fantasy. Often the new species – with whom the reader identified – had telepathic abilities.

Wyndham’s excellent Midwich Cuckoos had a different slant, with its inhuman children. Arguably, it belonged to a time when British writers shared none of the optimistic enthusiasm of their American counterparts.

Nowadays, fictional post-humans have accelerated from homo sapiens to something different with technological help, exemplified by Charlie Stross’s hard SF, in a trend begun by Vernor Vinge.

And yet there was another trend, back before the New Wave, of humanity improving via psychological disciplines, particularly General Semantics. The obvious example is van Vogt’s (rather bonkers) World of Null-A, which I could practically recite by heart when I was 14. Perhaps a truer example would be the more rational Heinlein. General Semantics arose from post-World War One determination to bring logic to an insane world, after the madness of the Somme and Ypres.

So that worked well...

Still, van Vogt’s book gave me a powerful dictum: “The map is not the territory.” It has the equally powerful corollary that saying a thing does not make it true... even when the speaker believes it. These are tools for the rational mind. I’m grateful to have learned these so young.

That saying became one of the assumptions-we’ll-keep-while-useful (aka presuppositions) of neurolinguistic programming. Another descriptive term that semanticists used was “false-to-facts”, and I wish it, too, had carried through to NLP in order to emphasise that not all maps are equal, and some are just plain wrong.

And yet I find that skilled NLPers have a really useful cognitive toolkit. I learned how to wield the techniques from Paul McKenna, pictured above, for which I am hugely grateful. Also, hypnosis is so cool.

I may, however, be jealous of Paul’s dog, Mr Big. If you find Mr Big’s blog – possibly written with the help of Paul’s partner Clare – you’ll see entries like: “Today I had my belly rubbed by Cameron Diaz.” Well, blimey.

Many of the best hypnotists don’t really ‘believe’ in hypnosis. In the more advanced training, Paul teaches techniques that are generally known as Deep Trance Phenomena, but doesn’t consider ‘deep trance’ a useful concept. If you’ve ever been lost in a book – and you have, haven’t you? – that state of mind is all that people mean if they use the word ‘trance’.

Anyone can turn up on such training courses, and some are delightfully bonkers, while others are rationalists, including lots of medical doctors.

Only this week, I was chatting to a neuroscientist about his research on neuroelectrical changes during hypnosis. Interesting stuff.

For me, if you want a philosophical framework for understanding the universe, you need more than that handy toolkit. A book that nicely links current academic psychology to established philosophical ideas is The Happiness Hypothesis by Jonathan Haidt. It’s clear and logical despite the title (and the British cover could be better). A cynical Arena critic wrote that it looks like “one of those limp pieces of lifestyle philosophy” but is actually “a superbly argued, crystal clear and intelligent blend...” of psychology and philosophy.

A jolly overview of neuroscience is Johnson’s Mind Wide Open, and for deeper thoughts on the nature of mind, I turn to Pinker, Dennet and Hoftstadter. (Why, you cry, I’ve got all their albums!)

One reviewer of my novelette Sideways from Now (appearing in Lou Anders’ Fast Forward 1) said I’d anticipated an idea of Douglas Hofstadter in his new book, I Am A Strange Loop. He was right.

Although it might have come from a throwaway sentence in The World of Null-A. Oh, good grief.

Still, I blame Hofstadter’s phenomenal Goedel, Escher and Bach for my long-abiding interest in self-reflexive statements, recursion and paradox.

Now, aged somewhat more than 14, I’m happy not to be a mutant (except to the extent that everyone of us actually is). I’ve settled for being human. 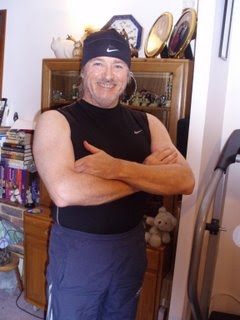 I recently received a couple of reminders that practicing martial artists read my books and come here to the website. Thanks very much! Well, that's one thing... Another is, apparently I turned fifty earlier this year. Surely some mistake.

So I thought I'd talk about working out, just for one blog entry, since I've not discussed matters physical for a while. If my next blog is about psychological stuff, I'll maybe call it Going Mental.

This is my diary, not a training manual, and always see your physician before starting a programme of exercise, and you know all the rest of the legal disclaimer... Also bear in mind Mark Twain's dictum (which I got from Matt Furey): "Be careful what you read in health books. You might die of a misprint."

Actually, that reminds me, that I own several (otherwise decent) books on weight training that fail to properly highlight photographs of poor technique -- as in, do NOT do it this way -- alongside those showing the correct method. Hmm.

Personally, I don't do much scheduling in advance. Then again, I'm not a professional athlete; I'm someone who manages to train solo when there's no one around to motivate me. (And I used to do it while holding down a full-time day job that entailed over four hours a day commuting -- or else being away from home in a hotel somewhere -- and writing as well.) What I do is, select from a series of modules that fit together to form a workout.
I recorded a week's training, starting the Saturday before last, just to give you an idea. Another week will be different.

The week in question I trained solo, but with access to equipment, meaning my dungeon-like garage gym (which I used only one day) or just in the house, where I have dumbbells, plus running around the streets. There's plenty you can do with just your bodyweight and a pair of running shoes, and if you're in a hotel room you can always use flexible exercise bands -- use 2 or 3 together for proper tension, or buy one of the high-tension loops you can get nowadays, with up to 200 pounds of force to work against.

Well, this was John's training for 7 days. To begin with, my wakeup routine every morning was an exercise flow from Scott Sonnon's prasara yoga system. The main workout was later in the day (in fact, often late at night).

And that was the week that was! So, am I showing my age? Well, I trained to music just once during the week, and that was to ZZ Top.

Next week: how to turn your Zimmer frame into a deadly weapon...
Or to quote the magnificent Rickson Gracie, just 'flow with the go.'