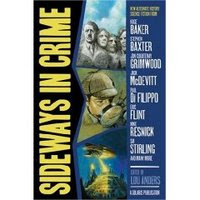 As inadvertently blogged below, I'm back in Oxford this week, pretending to be a computer scientist (or at least a software engineer) once more. I already established that one of the other guys had to be an instance of a specialization of me, since he could finish a milkshake in less time than me. (The post-condition of a subclass operation, like a class invariant, can be stronger than the superclass version, or equally strong but never weaker. The principle is called covariance. Any practicing programmer knows about polymorphism and the like, but übergeeks take things to another level.)
Speaking of other realities (in a city that houses David Deutsch, Philip Pullman, and dozens of homeless drug addicts... er, that is, people from two distinct subsets of humanity), I wrote a rather gruesome story set in an alternate world, for Lou Anders' anthology, as pictured.
Writing in SFX, Jonathan Wright praises the Jon Courtenay Grimwood story in the same anthology, before adding: "Also holding up the British end, John Meaney’s “Via Vortex” is built around a gory idea of how near-instant teleportation might be achieved. If we didn’t know him better, we’d be worried… "
Ah, well. You all know me by now.

(Despite what it says below, this post has comments...)

Hi, Chris... I'm glad that Paradox kept you reading late into the night. Would Penrose tiles become curved Penrose snowflakes (asymmetric Koch snowflakes) in mu-space? I'll have to think about that...

I don't know Professor Penrose, but we do have the same agent, and I am hanging around in Oxford University's computer labs this week. So I really shouldn't take his name in vain. But I did.

Oops. This was supposed to be a reply to a comment in the post below. But I'll let it stand, with this amendment. Without the previous sentence, this would be a non-self-referential post that would appear to be a non sequitur. So I'll just add the title to this post, which you may have read first, but I'm about to add as the chronologically final words I'm writing in this post.