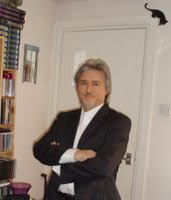 So last week I was demonstrating how to punch a wall in a Zen-like manner -- or rather explaining the traditional use of a makiwara striking post -- when Chris Hill exclaimed: "That's not Zen." And I explained that it really was. (In fact I was bemoaning the overall state of karate, which has either lost or never had the aliveness of MMA -- mixed martial arts -- while forgetting the traditional bits that were actually good: serious attitude, hitting solid objects daily -- I prefer punchbags -- and grappling. Or maybe I'm getting old.) Neither stray thought nor emotion: that's Zen.

There are those who allow their left frontal cortex to dominate all actions, existing only cerebrally, and I guess that's a choice I understand. But the Olympics symbolize another way to live.

And didn't the Bird's Nest stadium look like a Jim Burns painting brought to life? For anyone who saw the whole of the opening ceremony, the future is here, and it is so sfnal. And with 2008 wu shu performers demonstrating their own kind of harmony.

Ironically, here I am glued to a screen -- me, the person that normally discourages TV watching only because the daily hours in front of the goggle box are a substitute, often, for achieving one's real dreams. Unless your dream is to become a scriptwriter, in which case you probably need to watch a lot, just as an unpublished writer needs to read a lot.

But there was some terrific judo today, the first day of the Games. In the final of the womens' under-48 kilo category, Alina Dumitru whipped out an awesome ippon-scoring throw for the big finish. And the men's under-60 kilo category ended with a blinding wheel-the-man-through-the-air move from Choi Minho. Marvellous. I understand that it's a hard sport to watch with comprehension if you've never practiced it. 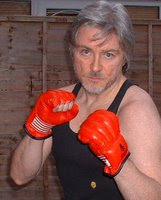 So I'm going to recommend a book that will be rivetting only to two kinds of reader: those who practice martial arts and those who don't.

The book is The Pyjama Game and the author is Mark Law, award-winning author and journalist for the Daily Telegraph. As a 49-year old who never did sport, he took up judo ("the sport that puts the harm in harmony"). The book is partly his story, mostly that of the people who made the discipline... and it's beautifully written, and very funny.

Every bout begins with the command Hajime! Law's description: "it sounds a little like one Glaswegian greeting another." Apart from the one-liners, there's writing like this:

"But in all this there seems to be one common language, a language of fighting like no other... This is a vernacular of colliding and twisting torsos, of sweeping legs and whipping wrists, of assertions written in the air with flying bodies."

And the historical stories are fascinating.

In some earlier blog, I wrote that the best knockout I ever saw was in a lightweight women's fight at the British Judo Championships sometime during the 90s in Crystal Palace. (A throw leading directly to a strangle, forearm impacting the carotid artery. Beautiful.) But it's still an immensely civilized discipline.

Facing off against an opponent in any combat sport involves one essential aim: to deck the other guy. I often smile when I hear a boxing referee say "Good luck" to the fighters as they touch gloves. There's something paradoxical and wonderful in wishing luck to both of 'em.

So here goes. To all athletes -- Olympic or not, combat or not -- good luck, everyone.