So what's a blog for, I wonder? News items, certainly, so I'm happy to announce the US publication of Black Blood with nice responses from Publishers Weekly and other reviewers. Ta lots, everyone! 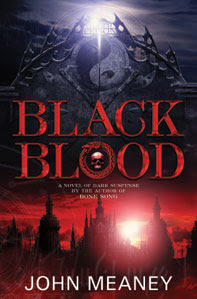 General response is approval of the plotting, taking the odd alternate Earth for granted, plus the ending, which is even more outrageous than the ending of Bone Song. It still makes me smile to think of it, and since I try to be my own harshest critic, that's possibly a good sign.

Anyway, I'm scraping in the only posting for Feb at the last minute. I could use the blog for observations of quirky things I've noticed in the real world (of my personal worldview) but that's exactly what a writer should avoid. Those little details help build up pressure in the furnace of the unconscious mind, and surface later in stories.

I'm minded to write essays on various topics and post them on the website outside the blog. (And it would be sensible to get those essays published elsewhere as well.)

Still, here's a thing I've been wondering about. Are we all sensibly categorized as being Platonists or Sophists?

My link to Steve Morris's excellent MMA website (that's mixed martial arts, for any non-cognoscenti out there -- or perhaps you know of the UFC) mentions that he leaves some people's illusions in tatters. What I allude to is the way he describes the reality of samurai culture, which is in contrast to the images many people have of them. Why is it important in this context? Only to the extent that some people might use mental imagery of samurai as part of their visualization strategies while training in karate, let's say.

The more I learn of applied psychology (including NLP), the more I become a sophist for pragmatic, operational purposes. If someone wants to visualize themselves as wearing Iron Man's armour, for example, then I'm all for it... provided the visualization has the desired effect of putting the trainee into a more empowered neurophysiological state.

But it's not real, and you have to apply boundary conditions or reality checks. Without checking the historical references for detail, I seem to recall that during the Boxer Rebellion in China, some of the tong members had been trained in martial arts environments that were highly hypnotic, and believed that their bodies were invulnerable to bullets.

Try telling that to a bullet.

So, I don't want to get into the samurai thing -- check Steve's website for that. (It's maintained by his partner Tricia Sullivan, so even if you're not into martial arts and haven't heard of the legendary Steve Morris, you may well have read Tricia's excellent books.) There's another example, closely related, which is the Spartans.

I've not seen the movie 300. I did notice that afterwards, particularly in the US, people were formulating "Spartan Warrior Workout" regimens. Now imagining yourself as a Spartan warrior might well be empowering to you, in which case, all the best!

However, I suspect the movie took the same approach to the Spartans' sexuality as did Stephen Pressgate's novel Gates Of Fire a few years back. I thoroughly enjoyed the book. But I recognized it as fiction.

So here's the thing. Most of the guys currently visualizing themselves as Spartans would be horrified to realize that they would need to have young male lovers to really play the role. Do you think someone should tell them?

If your answer is yes, you're either a Platonist or you just like messing around with people's heads...

(By the way, gay readers tell me they approve of my Nulapeiron books, in case you're wondering. I doubt if they would approve of the Spartan relationships. The key word is 'young'.)

All of our perceptions create models of the world, so the Platonic ideal of discovering absolute truth is at one end of a continuum that's impossible to reach. The opposite end is telling people whatever they need to hear in order to create the response you want. But the thing is, some models of the world are wrong. Newtonian gravity can be considered an approximation to general relativity, and so be a valid model at a different level of abstraction, while phlogiston theory was a guess that turned out not to match reality at all.

So what do you think?