So today's fuss is about whatever it is the TV news reporters can't divulge... That is, they can now tell us that there have been questions asked in Parliament regarding that report whose actual contents they still can't divulge because of the court gagging order. But the point is, the contents have been twittered and blogged about, because the law doesn't affect the web. Hey! (Non-UK readers will have to dig around a bit if you're really interested.)

In the same spirit, what top secret stuff can I reveal? Well, people have rightly praised Charles Stross's Saturn's Children as a terrific posthuman romp, sexy (yet not sordid) despite a lack of actual human characters, but the most important feature surely is the pivotal appearance of Dr Meaney...

I've not been in a novel since Peter Hamilton killed me.

It would be nice to return the favour, but ABSORPTION doesn't have the same kind of humour. So there'll be no Stross character in any forthcoming John Meaney book, I don't think.

Mind you, I'm not speaking for Thomas Blackthorne... 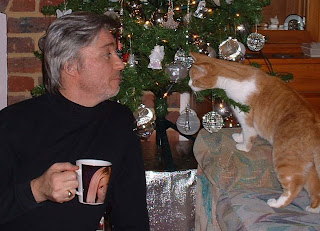 Every writer goes into altered states for a living. In fact, so do most people, one way or another. Just think: if you're immersed in writing program code, or you're staring into space designing a building, or you're a teacher whose focus of attention is entirely on the kids in front of you while the material you deliver comes Zen-like from your unconscious... well I don't know about you, but I think they're all altered states. Being "in the flow" is only one variety, and it occurs when the full bandwidth of consciousness -- you know, that thing that can only be aware of up to seven things at a time (allegedly) -- is fully engaged, with nothing left for self consciousness.

The uses of NLP (neuro-linguistic programming) for writers are manifold. Like me, the hugely successful thriller writer David Morrell recommends knowledge of NLP to everyone who wants to write. What's interesting to me is that the language patterns (the L in NLP) are not the most useful part -- at least to someone who's been writing for a while. In fact, every inveterate reader of novels has internalized vast numbers of appropriate language patterns... hypnotically, because that's the way to learn them. The best of all trance states is the one called lost in a book.

And you know I examine New Age activities with a scientific mind, right? Like, hypnosis is the state that occurs (easily seen via EEG, never mind fMRI) when the precuneus nucleus goes into hyperdrive (that's the imagination firing up) as the (nagging voice) anterior cingulate just goes quiet and softens...

So I've spent the last week helping out on the sidelines at at an NLP Practitioner training seminar. The best part is meeting new people, who are already multi-talented before the training begins.

(Caveat: while there are sensible medical doctors and clinical psychologists who use these techniques, there are also sales folk whose ethical boundaries are clearly different from mine, while some of the people most deeply into the culture are schizoid-delusional or even sociopathic (by the objective clinical definition) in my amateur opinion.)

Anywhoe, one of the delegates was a world-class professional MMA fighter (cage fighter) with a PhD in computer science, whose training partners are all scientists. And he's already a therapist and author. (And his girlfriend is just as accomplished and as nice a person.) You know, when I wrote Paradox, someone mentioned that several characters seemed too talented -- but I get to meet these great people for real.

It's like a science fiction convention in an alternative universe, which is dead cool. On the other hand, if you want to know how to go into a creative daydream, just stare into your cat's eyes. For a long, l-o-n-g time...

LIFE ON THE EDGE.

I've just submitted EDGE to my editor Marc Gascoigne. Yes, it's 2 a.m., but never mind. It means that despite being in the UK, I got to learn the Ig Nobel results only an hour after the award ceremony in Harvard.

The Public Health prize has to be my favourite -- the bra that doubles as two gas masks. You might associate sweaty underwear with offensive biochem weaponry; nice to know there's a defence, too.

In last year's awards, the most interesting was for the research that showed high-priced placebos are more efficacious than cheaper ones. That reminds me of a hugely important result -- a few years old now -- to do with what I think of as triple blind testing...

I'll post on that when I've woken up from my post-submission sleep...