Edge: "A fast-paced thriller set in a future Britain where legalised duelling and The Ultimate Fighter-style TV shows are a part of daily life, Edge combines hard-hitting action and informed science to create a novel on a par with the cyberpunk masterpieces of the '80s and '90s."

This is in the Attitude section of Fighters Only magazine, which is the foremost MMA and lifestyle magazine. I'm dead chuffed that they like Edge, because this is one book where the combat is important, and these guys know what they're talking about. Check 'em out.

It's here at Total Sci-Fi, and the reviewer, Paul Simpson, absolutely gets it. "What starts off as a simple missing persons enquiry develops into a full-blown coup against a fascist state..." is a pretty good precis of the book.

He describes the setting as dystopian, one that "unlike many... seems all too plausible" but where people just get on with their lives. Absolutely! And he mentions "action sequences highly reminiscent of Adam Hall's Quiller spy novels." For me, there is no finer praise.

The editors of Vector, the BSFA magazine, have interviewed a whole bunch of writers in a survey of the state of the art, echoing a similar exercise 20 years ago. Here's my contribution online (at least for the time being).

I suppose someone felt they had to do the remake. The only thing that spoiled the original kids' movie was that neither the teacher nor the student had a clue about karate. (When Miyagi fights in long-shot, he's doubled by Fumio Demura, who knows exactly what he's doing.) Many people are already saying the new movie should be called the Kung Fu Kid on the basis that a) it's set in Beijing, b) the martial arts are all Chinese (wu shu/kung fu), c) there's no karate in it. On the other hand, hardcore shaolin chan and hardcore shotokan (or other styles) really aren't that far apart.


So why go see it? It looks like fun, and the Miyagi figure is played by... Jackie Chan. Oh, my God. He's about my age. And he's old enough to be the wise, old teacher. Blimey.

On a forum that I breezed through yesterday, a newbie karate student asked forum members whether he should start weight training. The advice ranged from never, not until he's a brown belt, to start right now. Of those who advocated weights, some insisted he only do high reps, while others insisted only low reps would help. No one actually explained what attributes different forms of training develop; nor did they ask about the guy's background, circumstances, motivation and goals. Some didn't even seem to recognize the importance of strength training (though others pointed out that it's traditionally been part of karate - in Okinawa they used weights that weren't shaped like barbells, but it's still weight training - called hojo undo (rhymes with mojo mundo))...

Anyway, they ought to check out Alain Ngalini.

I wanna be him, when I grow up. 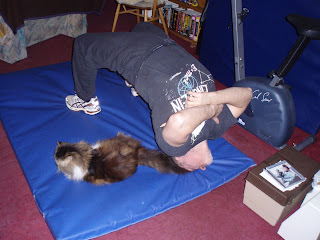 All grapplers (judo guys, wrestlers, jiu-jitsu folk) use the back bridge - aka neck bridge - as a fundamental exercise. Most put their weight on the top of the head and both feet. The version taught by Matt Furey adds a curve to the upper vertebrae (think Gothic arches) by rolling the weight onto the forehead.

Here I'm demonstrating an advanced form. Note my forehead on the mat, arms on chest (so no assistance from hands), and a three-legged cat's tail in my ear.

This is what happens when you engage the Paddymonster as a coach. I'm pretty sure that Mrragh-agh-agh means One More Rep. Except when it means Feed Me Now.