Having just finished The Lacuna, here's my considered in-depth analysis:

Holy crap. Now that's how to write a book. A bloody excellent book.

So, a strange day today. Writing work consisted entirely of staring into space and hallucinating what happens next. It's rare for me to do that and not actually write words, but I know I can trust myself only to pause when it's right. (Sometimes I have to put a book aside for a few weeks before returning - that's happened on two, maybe three books. I only trust these feelings because they come so rarely.) It's Sunday, of course, but why would I take a day off entirely?

I've a read a bunch of books over the last couple of weeks - a lit'ry piece, a horror-thriller hybrid, a thriller, and one of Christopher Moore's insane, funny offerings: Island of the Sequined Love Nun. But the real prizes were this week. First, Al Reynolds' Terminal World, which is most excellently vivid, with gritty, bizarre and noir elements, a very unlikely love story, and a quest across a world that's not only weird, it's a genuine puzzle. Secondly, Barbara Kingsolver's The Lacuna, which I read to the midpoint this evening, and put down so I don't finish it too fast. Sumptuous writing, a delicious, spicy, hearty mix of words to create a story-feast.

And then Yvonne switched on the TV just as Sherlock was starting. Sherlock Holmes in a slick contemporary setting, written by Steve Moffat, and using a new television technique to illustrate his thought processes. Played as the sociopath the character always was, and, er, just like Dr Who...

So what's doing the trick - giving up caffeine, drinking soya milk, or just the increase in cardio training? Anyhow, my blood pressure has dropped from oh bloody hell to normal, and 5 kilos of excess weight has disappeared from my waist. 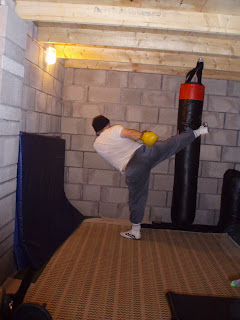 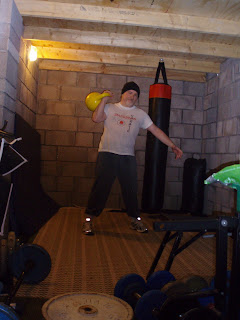 Penny Hill asked how my willpower was, when she wanted to make coffee, when we visited chez Hill a couple of weeks back. I almost answered that it wasn't relevant, then realized that wasn't quite right, then found more interesting things to talk about. Thing is, willpower allied with imagination might have helped me make the change - to kick my decades-old habit - but as a one-off behaviour-change thingy. After that, coffee is just something I ignore. No willpower required from that point onwards.

One of the best-known NLP gurus appeared sociopathic every time I've seen him in social interactions, possesses some abilities I associate with far-spectrum autism, and is not a pleasant individual. Where I would agree with him is that if a change requires ongoing courage, there might be better ways of doing it.

Crap. I am so not becoming a life-coach guru. I've got better things to do.

Anyhow, I'm feeling leaner and meaner. My muscular weightlifting/rugby playing/boxing nephews are also using my home dojo/gym and lifting massive weights. Great to have 'em around.

An excellent review of Absorption from the Times.

Spent yesterday morning in the Hampshire sunshine (or maybe we were in Oxfordshire) supporting Penny Hill as she took part in a Race For Life and came in with a 5K PB. (That's Personal Best in runnerspeak.) Chris, Yvonne and I supported by, er, eating ice cream and watching the runners.

In other news - I've not blogged for a couple of weeks, mea culpa - the very end of June was spent at Imperial College, London (that's the UK's premier science university) attending an event called Science for Fiction, organized by physicist and writer Dave Clements. Al Reynolds, Pippa Goldschmidt, Geoff Ryman, Molly Brown and Pat Cadigan all attended. There were 8 lectures on string theory, cosmology, bioinformatics and loadsa good stuff. Had a great time. If it happens again next year as planned, we could do with more writers there!

I ended the event by having lunch with Pippa, Molly and Geoff, where I had a Jaffa Cake milkshake. Mmm.

My gym/dojo in the back garden has seen a lot of use, and I'm getting back to what I consider a decent level of fitness. Every time I go out for a run (bearing in mind the valley slopes) my hamstrings talk to me. Things like: Hey, remember us? See how useful we are? Never neglect us again...

The 6ft punch bag is humbling and excellent. I've always done bagwork in shoes - my old garage dojo had a concrete floor, the kickboxing gym I trained in required everyone to wear taekwondo-style shoes, and karate clubs don't come equipped with punch bags in this country. (They use space in sports centres, school gyms and church halls - full-time dojos are rare.) I'm only doing one round barefoot and barefist per workout for now - after the 1st round I slip on the shoes and gloves, cos I iz delicate, innit?

In writing news... Well, I'm working on Transmission every day. One day at a time.