One, two, three... Currently in test mode, here's my multimedia page where you can hear me read the first chapter of Edge. It's not yet working on all browsers, and may need to you perform a manual plugin install (as directed by the browser) or to enable ActiveX controls (again as prompted). I'll tinker with it when I've time, before setting it live and maybe adding a few more files. Any requests? I've copies of all my German translations to hand... 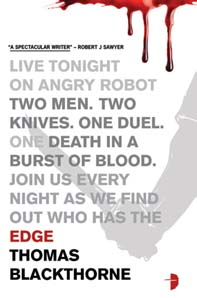 Edge appears on Tuesday 28th September in the US and Canada! Already there's a nice mini-review here. Editorial feedback on the sequel, Point, which I delivered a while back, is positive. (In my shy Brit way I'd blush if I said any more.)

In Moscow, homeless dogs are beggars - and some are smart enough to navigate the Metro system, and cross roads only when the green man shows on the signal. This blog post about dogs and evolution was one of the finalists in the 3 Quarks Daily Science Prize 2010 competition. I didn't see these dogs in Moscow in the mid-80s - but it was December and everywhere was covered in snow.

You probably know that two Brits won Hugos at Worldcon... China Miéville - the Vin Diesel of fantasy - and Charlie Stross - the, er, Charles Stross of science fiction - won shiny rockets. Both very well deserved. One vast round of applause, gentlemen.

I'm attending BristonCon on 6th November. There'll be a panel on writing the fight scene, which I'll be on. The writer I've always emulated in this regard is Adam Hall, author of the outstanding Quiller novels, which produced physical tension in the reader in a way that no else could. (They didn't have the humour of Deighton or the literary fury of le Carré, so the books aren't quite as well known. But the same author, under his real name of Elleston Trevor, wrote a couple of the classic World War II novels, as well as Flight of the Phoenix.)

For unpublished writers looking to do research, I'll recommend either picking a fight outside the chip shop when the drunks spill out of the pubs on Saturday night, or reading Geoff Thompsons's and Marc McYoung's books on real violence, and engaging in something that's physically stressful though not necessarily violent. (The main thing being to experience adrenaline dump.)

Whether we'll talk about the physical training and techniques, I don't know. Fighters train hard. They usually don't look like bodybuilders, and here's why. Watch (if you can stand it) Buffy hitting the punch bag or a vampire. She flings out her arms and not her body. In fact, the arm is just the delivery system of a punch - its purpose is to be rigid enough and properly aligned for impact, but that's all. The force comes from the linear acceleration and the rotational torque of the entire body - the legs and core create the strike.

On the other hand, it's possible to be built like a terminator and be great at both karate and hardcore fighting.

A while back, I linked to a training video of Alain Ngalani. He's how I picture Hawk in Robert Parker's Spenser novels. (In the TV series Hawk was played by the guy who played Sisko, commander of Deep Space Nine.)

I still want to look like him when I grow up.

Anyway, he doesn't just lift massive weights and hit the heavy bag - he can do the business in the muay thai ring.


Here's Ngalani against a tougher opponent. This deliberate implacable destruction of his opponent's leg has to be taken in the context of professional muay thai fighters - they're conditioned to receive impact. Most people couldn't take a single one of these kicks.

He's aiming for the lower quadriceps, not the knee joint - it's not obvious from the camera angle, but the ref would have intervened otherwise. Plus I've seen him do this to other opponents. In other words, this is what Ngalani can do within sporting rules... Imagine what would happen on the street.

FISTS OF STEEL, FEET OF CLAY

I've moved in and out of the karate world, because I see merit but also disappointment in it. Traditional arts can be ritualistic to some extent, and if I'm going to have ritual in my life, that's the only place I want it - I'm not big on belief systems. If I were a real fighter, I probably wouldn't want it there either.

Ritual unconsciously triggers mental states, the question being whether they're useful states. For someone who did not come to karate as a natural fighter, this offers buffers and protection, but can also install poor movement patterns that negate the useful reflexes we're all born with. (See Tricia Sullivan's website - links from the bio page - for more on this, including insightful stuff I hadn't thought of.) I make no claims about my own abilities, you understand.

Or you can think of it this way. There are (supposedly) benefits other than fighting ability to be gained from training in a martial art - but 99% of students (if not 100%) have a desire to be able to defend themselves as a primary motivation. Later, it can get lost in the complexity of learning a system. The worst thing is that someone soon thinks the self-protection part is easy - dealt with by basic techniques - and that they've already got that part sorted.

Anyway, what's on my mind is the concept of 'sensei'. The master at the front of the class is the Big Cheese, the Real Deal, right?

Well, in the case of Enoeda-sensei, for me that was true. His charisma drove everyone to train hard, and I had an absolute sense of his uncompromising integrity. His notion of the right way to act in a given situation might be different from mine - he came from such a different culture, for one thing - but I was always sure he would act in what he thought was the right way, however hard. (Not that I knew him personally- I was the guy at the back of the class.) Incidentally, he was not one of those instructors who insisted on the correct Platonic form of every physical technique - when he threw a powerful gyaku tsuki punch, his head moved first, before his hips, and his rear ankle rose from the ground. (A boxer might wonder how else anyone would punch, but a karateka would be looking up the spelling of 'sacrilege' at this point.)

So once, when I'd just started training at a new dojo, I wandered close to the 4th and 5th dans who were chatting away in one corner, laughing about something. What could the great men be discussing? Well, the head of the association was talking about how he'd bonked some other bloke's wife in the front seat of her very posh sports car. Oh, dear.

Another time in another city, my instructor had a story to tell about his instructor - a guy I used to sometimes train with myself, and who is now a 7th dan. So my instructor and his mates turned up for training, went into the changing room, and found Senior Instructor and one of his lady brown belts working on their grappling techniques on the floor. And they'd forgotten to put their clothes on. It's not so much that they were both married to other people that's disappointing: it's the fact that this lady's husband was also a brown belt student at that dojo. Luckily, he wasn't one of the guys that stumbled into this scene. (Apparently Senior Instructor shouted: "Don't you buggers ever knock?" The natural reply would have been, "Not walking into a changing room, no." But they just went back out laughing.)

I think I'm lucky that my first training was in judo. I found it hard, because big people would just sit on me in sparring, but there was zero bullshit - no moral superiority, just hard training.