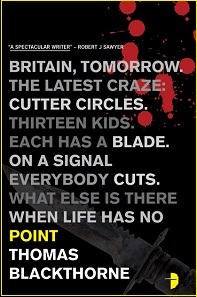 So last Thursday was the Gollancz party, sort of a Halloween bash, where the male authors turned up in unfancy dress - with the blazing exception of Emperor Steve-Deas-Ming the Merciless - and the ladies looked gothically gorgeous. There were new authors to be introduced to us, but for me it was mainly about catching up with old friends - there were several people I've known for 14 or 15 years, among agents and editors as well as fellow writers. For me as a full-timer, such events have assumed a greater importance than they used to. A jolly fine time was had by all.

The lack of recent blogs is because of my big push to finish the first draft of Transmission - all quarter million words of it - which I managed the night before the party. Whew. I'm expecting the copy-edited Point soon, for final tweaks.

Point treads on new ground, as you can see from the cover.

And for anyone who's attending Bristolcon, where one of my panels is "Writing the Fight Scene", I gained permission from Mrs Abercrombie to beat up her husband by way of a demo. Joe's way taller than I am, so clearly the moral high ground is mine...

For anyone with fond memories of Sooty and Sweep, this radio show (a short-lived link - the show starts 2 minutes 15 seconds into the audio clip) may be traumatic. It's one of A Series Of Psychotic Episodes by comedian Miriam Elia.
It had me sideways in my seat and weeping with laughter. Then I hauled myself upright with the steering-wheel, and no one died.

Some of the weird physics in the Ragnarok trilogy comes from the pervasiveness of emergent phenomena throughout physics, in more than the obvious places. I'm currently re-reading Robert Laughlin's The Different Universe, which emphasises this. It's a Marmite book - the usual reactions are love or hatred, rarely neutrality - but Laughlin is a Nobel laureate, so you have to pay attention. Much of the book's attraction comes from exploring areas of solid state physics that most of us don't know about. (Personally I've always been bothered by the way sound quantizes (as phonons) identically to electromagnetism.)

That includes exploring different phases of matter. Solid/liquid/gas and maybe plasma... that's as far as most people get. But liquid crystals don't fit that simple categorization (while at a higher level, liquids and gases are treated identically as fluids when it comes to modelling flow and turbulence), and there are many other examples.

One of the newest examples is two-dimensional solids, exemplified by graphene. Two professors at Manchester University have today won the Nobel Prize for physics for discovering this new phase of matter - or if you prefer, a new class of materials with remarkable properties. (Need a material for your fictional starship's hull, anyone?) The Brits have won it again.

Mind you, these two Brits are called Geim and Novoselov, both hailing from Russia, but what the heck. Nice work, anyhow.