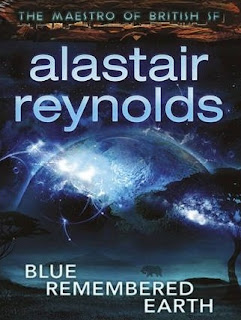 This is a book about humanity: family rivalries, competing corporations and political visions swirling around a major evolutionary jump for our species (and just possibly for elephants). And it is a very human story, nearer to us in time than Al's other novels, with nice extrapolations of cybertech, while retaining his spectacular perspective, and delivering the occasional shiver-inducing touches of SF noir that we've come to expect. The “inevitable” end wasn't what I foresaw, and that's a fine thing: we've two more volumes to come, and a lot more surprises.

Oh, and... no major character is white – possibly no characters are. Blue Remembered Earth expands the genre in gentle, unstoppable ways, like an elephant's nudge.

AND IN OTHER NEWS...

Massive thanks to the Jupiter-sized brains I hung out with last week. It was terrific.

I've just been asked to be Guest of Honour at a 2012 con, which is lovely – more when it's official.

While I'm not a huge TV watcher (sorry, guys!), Spooks is my guilty pleasure, and I'm hoping they end the final series on a high. Looking pretty good so far, but actual happy endings are rare in these stories. And on a really light note, I've just started watching the 4th season of The Big Bang Theory.