When it was announced that Connie Willis will become the newest SFWA Grand Master (the title to be officially bestowed in May), this was one reaction:

“When I heard that Connie was going to be named a Grand Master, I was surprised," said Joe Haldeman.

If this writing gig doesn't pan out, perhaps the Ministry of Propaganda will hire me. But if you insist on knowing a bit more about Mr Haldeman's reaction, here's a fuller quote:

“When I heard that Connie was going to be named a Grand Master, I was surprised, because I assumed she’d long since been given the honor. It’s overdue and well deserved – congratulations, Connie, and welcome to the club.”

...which isn't nearly as funny.

At this point, you might think I've just been mean to someone who's widely regarded as being a very nice person indeed, in addition to being a super-talented writer. But that's because you don't know what she's really like.

The year: 1996. The scene: a blazing hot California morning, and a group of people meeting in a parking lot outside the Anaheim Conference Center in Los Angeles. Among them is a young writer called John, clutching a fax in his trembling hand - one that reads: "Congratulations, you have a two-book deal."

It is this young fellow's first novel sale (and he had not dreamed of getting a contract for two books), the news faxed through overnight from his agent in London.

Then Connie tells the story of her first short-story sale to a magazine. This magazine had a very unusual practice, which was this: along with every acceptance letter, they would enclose the cheque for the story. (This really is unique.)

"But the problem was," she says, "that the cheque was made out to someone else. A totally different name. I couldn't stop saying to myself, 'It's not really me. They've sent the letter to the wrong person.'"

Then, she takes hold of John's fax between forefinger and thumb.

"And you'll probably find that this" - she smiles a smile of hellish humour - "is actually a mistake."

Everyone else falls about laughing, while young John sobs.

Seasoned gym users are feeling more optimistic round about now: the influx of this-year-I'll-do-it new members is abating. Soon the newbies will be mostly gone. Hopefully, that's not you.

(Apologies if you don't care for fitness-related posts. There's a technical reason I don't use topic tags.)

Anyhow, it's well known that gyms take on far more members in January than they can cope with, because some huge percentage (80 or more, I think) will only last a few weeks. So if you're making a new start, be one of the winning twenty percent. Back off from the intensity if it's too much, and concentrate on coordination and technique. That applies to running, lifting weights, or whatever. Smooth action and settling into the training habit will get you there.

I like this book, by someone who knows what he's talking about. (Gentle folk tend to be surprised if they actually look inside military fitness books. There's no macho talk, not from the genuine tough guys.) 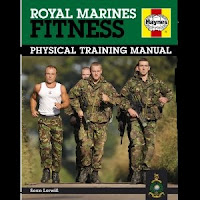 As for me, my conditioning training is in my back-garden gym, so there's no overcrowding. Just a need for a tiny motivation and energy boost to get me out of the door and running in the cold and dark. Easy.

See, I'm rewriting and polishing something, which means I care about the language, the taste and rhythm, while a book that's strong on stortytelling but without style somehow trips me up. Luckily, the last book I read was Don Winslow's The Gentlemen's Hour, which scores on all counts, and Amazon should be bringing me another of his books tomorrow. At times like this in the past, I've re-read James Lee Burke books, or the more recent le Carrés.

Interesting how storytelling and poetic language are orthogonal to each other, as we computer types like to say. Interesting also how writing novels affects what you read. Walter Jon Williams has said that he reads hardly any fiction, never mind other people's SF.

Oh, well. What I've been having difficulty reading lately is fantasy. It's all personal taste, and nothing objective. I started a book by a well-regarded writer, got to the part about how magic works in that world, shook my head and put the thing down. I'm not sure whether it's the use of magic or its particular manifestation, but I'm finding it all rather silly. Or is it my angst about the Enlightenment being reversed under a tidal wave of rampant superstition? And it's the second fantasy I've put aside recently.

It's not as if Harry Potter readers think magic is really real; and if they ask JKR, she'll tell them it isn't. Plus, I wrote Paradox and its two sequels knowing full well how much I was pulling fantasy tropes into hard SF.

The latest fantasy books I really enjoyed were those of Scott Lynch and good old Joe Applecrumble, so I know the genre's OK.

So here's a question: is it possible to write fantasy without magic?

Or maybe... here's a secret... this is what's bugging me. I've been told by professionals in the field over the past five years or so that I could make loadsamoney by writing fantasy, and every time I mull over the notion, I go... No. Don't think so.

(OK, I know Bone Song and Black Blood-aka-Dark Blood are called dark fantasy in the US. But renowned bookseller Alan Beatts, of San Francisco's Borderlands Books, once said that Bone Song disproves the urban fantasy tropes: if vampires or equivalents were real, cities would be like Tristopolis, not the ones in urban fantasies. And the setting is really an alternate Earth due to history's taking a different tack several billion years ago - the clue is at the beginning of the second book, inside the Police Commissioner's office.)

Speaking of taste, I confess to never being a fan of Philip K. Dick or Jack Kerouac. More broadly, I realize that books written by people out of their heads on booze or drugs have never worked for me. (Not a pre-judgement: I learned about the people after reading their work.) I read the opposite in the excellent words of either Nanny Ogg or Granny Weatherwax in one of Sir Terry's books, expressing the notion that people who build castles in the air need to have their feet on the ground.

I have read Snuff, and liked it loads.

Well, enough of that. All I need to revitalize my mood is a sandwich and a cup of coffee. [There. Done. It worked.] Tonight's training will be a run, body-weight exercises and weights. Had a good sesh in the dojo last night, and hopefully another one tomorrow.

TRANSMISSION!
My new book, Transmission, is out today! Not only that, but the SFX review links to a picture of my cats, at http://ly.bit.SFXcats

I'm currently being interviewed (in an asynchronous, email-mediated fashion) by Bob Neilson for Albedo One, the Irish SF magazine. I don't know if it's because I know Bob via the McCaffreys, or because of my Irish roots or a matter of sentimental timing, but it's turning into a detailed autobiography. Which reminds me that I should link from here to the various online interviews I've done over the years.

And that reminds me that next month is the 20th anniversary of my first fiction sale. Oh, my giddy aunt...

In honour of which, I've just decided I will make that first story available here on the website for free, along with one other. Does anyone have a preference for the other choice? Let me know via comments or email, please. Anything that appeared before 2010, let's say.

In domestic-trivia news, I watched The Karate Kid last night. I was already an adult when the first version was made, and this is the quarter-century-later remake with Jackie Chan as the Miyagi figure. I enjoyed it far more than expected, surprised by the emotional depth of one scene: JC's mourning his dead family.

I approvingly note something that Steve Barnes picked up on when the movie was first released, but which wouldn't have occurred to me, namely that the kid in question isn't white. Speaking of which, note the lack of white characters in Al Reynolds' Blue Remembered Earth, which I've already recommended, and am happy to do again.

My reading in the past few weeks has been non-SF. Lee Child was an unknown name to a panel audience in last year's Eastercon, but his Jack Reacher thrillers are huge in that genre, with a very compelling impetus to the narratives. There's a current controversy in the casting of Tom Cruise as the physically distinctive protagonist of the books, but as an author, what could one say? Cruise's involvement means that top professionals will be engaged in the making of the movie, so while it might differ from the book they're filming, at least it should be of decent quality.

Poor old Barry Eisler was not well served by the movie of Rain Fall, despite Gary Oldman's presence. Read the John Rain books, ignore the movie.

I'm quite the fan of the excellent, idiosnycratic Don Winslow. The Winter Of Frankie Machine and The Dawn Patrol are terrific, and my favourites of the handful of his books I've read so far. They include Satori, the prequel-by-another-hand to Shibumi - and if you've never heard of it, that may simply mean that you're younger than me. (It was written by the guy who wrote the Eiger Sanction - another mismatch between movie and book.)

Having taken a two-week hiatus from writing - deliberately, to do Computer Stuff - I'm getting back into the swing of things. A couple of days rehashing a book proposal, then back to Resonance, aka Ragnarok book 3.

In other entropy-related news, besides marking two decades of my being a published writer, this year features my 30th wedding anniversary and my 40th stepping-into-a-dojo anniversary. I'm really not sure how to celebrate that last. Maybe run up a mountain (no preliminary travel necessary, now I live in a Welsh valley), meditate under a waterfall, and fight off 100 consecutive attackers with my Zimmer frame. Or curl up with a cup of hot cocoa and watch Enter the Dragon.

May everything you do this year make you a better person. Wax on, wax off...