Here's the cover, with Jim Burns surpassing himself... 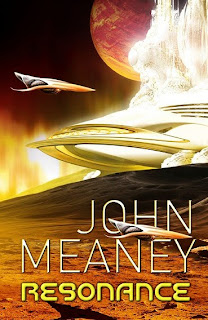 Meanwhile, anyone looking for some Nordic noir to read should check out James Thompson's terrific Finnish crime novels. Dark and deep, with all the poetic power of James Lee Burke, in a very different setting that comes beautifully to life. I've read Snow Angels and Lucifer's Tears back to back, and I'm waiting for those lovely Amazon people (actually a reseller) to deliver the 3rd book, Helsinki White. Marvellous.

Blimey. So much happening.

My hiatus must've started when Avengers Assemble opened - it was released here before the US. Steve Barnes wrote about it promising to satisfy the inner 12-year-old, and it met the promise for me. (Remind me to tell you someday about meeting Steve in LA. He is a wonderful and deeply impressive guy. And it's probably his fault that I got into hypnosis and related disciplines.) So far, it seems as if everyone's favourite Avengers moment features the Hulk-Loki face-off. Smackdown. Whichever. Good on yer, Mr Whedon.

Do the superhero movies make any sense to an adult who wasn't raised on comics? I presume the answer is no, and that we not-so-young viewers mostly appreciate the act of bringing those old memories to life. Which leads me on to Tintin, which I watched on DVD. (Cheers to my bro for the prezzie.) Snowy is the star, and entirely CGIed. It wasn't until seeing the Spielberg interview on the extras that I realized the US audience wouldn't know and love the original books and cartoons. (Are we still allowed to call them cartoons, or is there some other term?) Quite an astounding job in bringing them to life for two disparate audiences. As it happens, my memories of Tintin are fresher than one might expect, since I've been known to read the adventures of Tintin et Milou, Tintin y Milú and Tim und Struppi. (It's not just the dog whose name changes in translation.)

And Yvonne bought me Fireball XL5 (and Stingray), which is really digging back into the influences of early childhood. Between Steve Zodiac in 1962 and imported Marvel comics plus Dr Who in '63, that was a major expansion of my cognitive universe, right there. Yowie...

Besides the excellent TV21 and the monochrome Marvel reprints in Terrific and Fantastic, there were more traditional weekly comics like The Hornet and The Hotspur. Sporting stories formed a third or more of the content (not that any of this is definitive - I'm relying on pure memory from half a century ago). I can remember a football series whose artist had a distinctive style, but generally speaking, such stories didn't interest me any more than actual school sports. I do recall a series about a schoolboy cricket whiz who kept his special bat handcuffed to his left wrist, 24 hours a day. Speculations about practical difficulties in everyday life kept that one in my mind.

But then there was Our Man Wilson. Anyone remember him?

He was a lean, mysterious, bare-foot  athlete dressed in a black one-piece running suit, who turned up to save the day with feats of strength or running - either in athletic events or melodramatic adventures. But as the series continued, other characters found photographs from Victorian times featuring someone looking exactly like the contemporary Wilson (and his garment turned out to be of Victorian design). He lived in a cave, ate wild herbs and followed an esoteric mind-body discipline...

There are multiple influences that led me to suddenly embrace martial arts and athleticism at the age of 15 (after a sedentary childhood), but Wilson has to be one of the deep ones. Which is what happens when you're a youngster whose mind is filled with books, I guess.

Anyway, I don't take health or fitness for granted: they're gifts, and require work. The start of 2011 saw an incident which I made light of here at the time - as one does - but if it had been the pre-antibiotics 1930s, my exercise routine would've been reduced (within hours of the paramedics carrying me to the ambulance) to pushing up daisies.  (And panicking microbiologists got the Public Health teams swinging into action, once they discovered what strain had taken over my bloodstream and lungs. A little bit of drama!) We live in miraculous times. This year, 4 months of medication with massive side-effects are now 3 happy weeks behind me. Continuing to train through all that (I wasn't supposed to) was akin to returning to some of the harsher dojos I've known, and a useful reinforcement (because of the number of resultant injuries) of an important combat-related point: most injuries hurt 5 hours later, when the adrenaline wears off. So a strategy that relies on inducing pain in an opponent is on severely dodgy ground.

And now, with deep joy, I'm falling in love with running again. Until 10 years ago, I used to run nearly every day; I've started to add it back to my other modes of training. I've halved my distance (of infrequent runs) in order to increase the frequency. Gently does it. No attempts to go further or faster until I've had a few weeks of 6 or 7 runs.  (Slow running in general does not help explosiveness, although the terrain here is mountainous, which requires more strength than on the flat. But it's dand-baithak training, as per old-school Indian wrestlers, that gives me power-endurance - I hereby give myself permission to run as slowly as I like...)

And then there's that lovely discipline known as writing. The first draft of Resonance (that's Ragnarok 3) came in at a massively beautiful 254500 words, or about 1 hamilton. Word-wrestling ensues, and some deadly cuts as well. It will end up at half that length. Whenever I've not been Resonating, I've been working on my other, more speculative project.

And some programming stuff, academic and otherwise. I'm currently trying to work in Haskell - gimme a few years, and I'll really get to grips with it. Taught a good course to Brains The Size Of Jupiter. Cheers all, and to Jamie for the Java 4 Ever movie clip. (Slightly risqué - parental warning - or I'd embed it here.  It's clearly meant to be light-hearted.)  Some interesting stuff coming up over a very busy summer.

A couple of summers back, I was having breakfast in the Imperial College refectory, and observing a large crowd of sixth-formers there to see the university. (For US readers et al - Imperial is something like MIT or Caltech; sixth-formers are in their last year or last 2 years at school.) Some were American high school students. When someone mentioned Professor Brian Cox, and the Americans professed ignorance, there was vast enthusiasm among the young Brits as they explained who this supercool guy is and what he's done. [I just took a break to see Wonders of the Solar System on BBC Four. Yay, Brian.  And his books reveal a talent for explanation at a more rigorous level.] Turning a new generation on to science is a stupendous achievement.

The universe is amazing, if you take the time to look. Fly straight, everyone...

One of the masters, and one who brought something different and uniquely lyrical to the genre. RIP.