A long time ago, back when I was a full-time computer bod, I changed jobs and had to withdraw from the grad programme I'd started in. Unfinished business, which I returned to and finished a while back; but Monday last week was my first chance formally to graduate, and so I did. 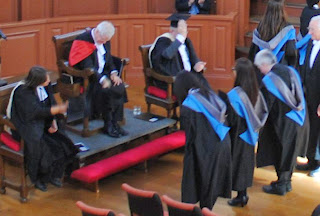 Over eight centuries of tradition, and the deepest commitment to world class research and teaching people how to think for themselves, make Oxford's ceremonies a serious form of theatre. The formal bowing and Latin oaths might be mediaeval (you have to respond "Do fidem" to a long exhortation), and the Sheldonian Theatre might have been built by Christopher Wren, but senior figures like proctors are no longer all male, and the graduands were taking photos on their phones, which are of course computers in constant touch with cyberspace and real people across the world. Change and constancy, as it should be. 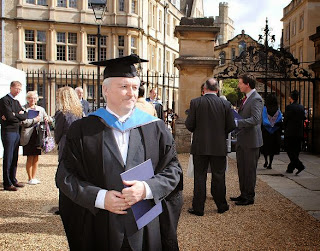 At fifty-six years of age and concentrating on novels, you'd think I hardly need a qualification to boost my computing career - and I don't - but it was still a big deal. We stayed the night before at the famous Malmaison, the former prison converted to a hotel, and all in all had a fine time. 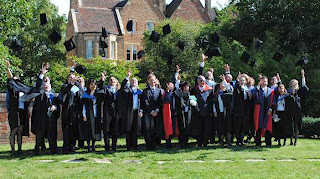 Oxford being a collegiate institute, it was back to the college for the final photos and the traditional launching of hats into the air. (And yes, for the hardened celebrity watchers, that is in fact Ruby Wax near the college president, Professor Jonathan Michie.) Though I'm a serious vegetarian, I'm merely an almost-absolute teetotaller, in that a sip of celebratory champagne maybe once every year or three is fine by me; and that day in Kellogg I indulged in an entire glass. 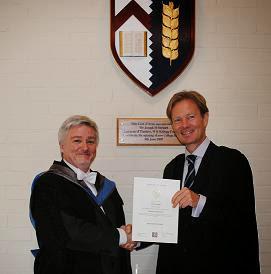