Some 13.7 billion years have passed since the Big Bang. That means that 13.7 billion years ago, everything (Every Thing) was stuck together in a singularity. According to the way people thought when the notion of a Big Bang was first accepted, the furthest away two objects could be from each other now (in the visible universe) is 13.7 billion lightyears, on the basis that the "cosmic speed limit", aka the speed of light, means that the furthest you can go in a year is one lightyear.

And then redshift measurements showed the universe is quite a lot bigger than that.

Some years back, I was teaching Computer Stuff to a bunch of code ninjas with brains the size of Jupiter, all of them smart enough to get physics jokes. So at one point, I gave a little ten-second riff on inflation theory:

According to relativity theory, nothing can travel faster than the speed of light. And according to inflation theory, that's exactly what the nothing did.

To my surprise, one of the guys said he'd puzzled over cosmic inflation as a physics student, and I'd just made it totally clear! (I'd thought I was merely being a smart-arse to relax the mood for a moment.)

In case you don't know about this stuff already, the point of inflation is that it's the spacetime-stuff itself that expanded. Lightspeed is the speed limit for anything travelling inside the medium that is spacetime; the medium itself can expand as fast it likes.

I grokked this early on because I'd previously been puzzled by explanations of cosmic redshift that refer to it as the Doppler effect. It really isn't. The equation for the wavelength/frequency shift is the same, but the model is different: the sound of a train approaching and then receding changes in pitch because of the motion of the train. Cosmic redshift is due to the expansion of spacetime itself, not the motion of stars through spacetime. Very, very different.

And of course, I mention it now because of the strongly named BICEP2 experiment at the South Pole that's discovered polarisation in the cosmic microwave background radiation that seems to be the "footprint" left by cosmic inflation when the universe was brand new.

On the other hand, the effect is rather stronger than predicted (originally by theoretical physicist Leonid Grishchuk at Cardiff University, Cardiff being one of the BICEP2 participants). Hope that doesn't mean it's like those little espresso neutrinos sniffing the Italian CERN coffee and breaking the speed limit except that they really weren't...


Been offline blog-wise for ages. Is anyone still here? My bad. We were devastated here by the loss of our most beautiful cat Bonbon, who passed away. Such a loss.

Our trip to Rome had been booked beforehand, so we went anyway. It was welcome, though we'd failed to prepare the various excursions that we'd intended, and simply walked around the mix-of-millennia that is the eternal city. I like the place. Part of my intended preparation had been to learn basic conversational Italian, kickstarting the process with the Michel Thomas course I've had for ages. But since all our plans went awry, I ended up going through only the first two hours of the course - if you've used his stuff, you'll know that's a little intro course in its own right. Armed with a visual dictionary and a phrase book, and I was right in there, to an extent I'd never have believed on the basis of so little time - even though I've used his other courses. 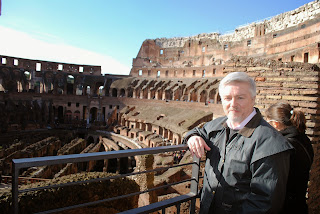 The Thomas deconstruction of language and the choice of what to teach first is astounding. A very interesting analysis by a reputable educational psychologist is Michel Thomas: The Learning Revolution by Jonathan Solity (hint: Thomas's ability to teach the core of a language in three days was nothing to do with charisma). If you've never heard of Michel Thomas, check out a documentary called The Language Master on YouTube.

Of course English is the lingua franca of contemporary western Europe, so in a capital city you don't need to know the native language. But that's really not the point.

There's a popular book on introspective personaltiies called Quiet which I've skimmed through. There's stuff I'm familiar with - the author quotes the findings of Tom deMarco and Tim Lister regarding the success/failure factors of software projects (the primary cause of failure, from rigorous analysis of 600 clients, occurs when workers cannot shut themselves off from distraction: the technology is irrelevant), and I'm wont to quote them myself, having attended one of their seminars some twenty years ago after reading their books.

What I hadn't come across was the notion that introspective people can perform better when devoting their time to one task at a time. Hence my division of time in recent years, when I've worked only on computing or only on writing for extended periods. This is in contrast to fitting in writing around a full-time job in the 1990s, when I had to treat writing as a daily discipline, as per martial arts and physical conditioning.

(Actually, I treat the last two activities as a single thing, which is the advantage of training at home, in my case in a big breeze-block double-size shed in the back garden. No luck involved, no more than that I'm "lucky" that I have the benefits accrued from training every day. And I like training in an unheated primitive environment after dark in the depths of winter.)

I'm writing material for a grad programme right now, which means the book I was working on is done. But I can't say anything more right now. Sorry!

With luck I will be able to say a little more when I get to mix with lovely fandom, which will happen twice over next month. Speaking of doing one thing at a time... Looks like April is Convention Month:

And I'm GoH at Eastercon on 18th - 21st April in Glasgow, Scotland.