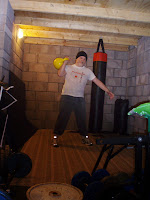 New Year's resolutions? Gonna need some psychological prodding to keep going? Try Dr Ann Maria de Mars' blog for thoughts on perseverance (incl. "persevere at the right thing") or Steven Pressfield's War of Art book. The latter has tiny "chapters" that will seem simplistic to the vague or casual reader, while speaking volumes to anyone engaged in an actual struggle towards a longterm goal - especially that of getting a novel written. 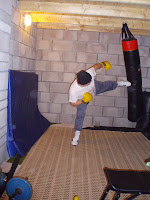 A new dedication to fitness? Good for you. For the seasoned gym rats, January is a hateful time, because gyms allow far too many people to enrol... in the certain knowledge that by February, most of the newcomers will have fallen by the wayside, but still be paying money to the gym in some form or other. Maybe you should start by walking every day and doing push ups, and join that gym in a few weeks time? But hey, start something now.

I'd pick my best SF reads of the year, but... I haven't ready any. Not a thing. That's pretty telling. Crime fiction, certainly - always! - including new books by old favourites, John Sandford and Ian Rankin, as well as re-reading some of their earlier work. (I've been reading Sandford since his first two books, written as John Camp.) A bunch of books by C.J. Box, who I discovered only last year. Those are the stand-outs.

My computer consultancy has been all to do with graduate training programmes this year, both writing material (cyber security being just one of the topics) and delivering two bootcamps for global brand-name organisations, which meant four months away from home, but a chance to do good work. Nicely successful, thanks to all involved.

My first programming job in the commercial world began in February 1982, when I was 24. The company's live production system was an IBM System/34, using the RPG II programming language and without a database (the data being stored in flat files, and formatted by the programs). We wrote code in pencil on pre-printed coding sheets, for an operator to key in and compile.

The exciting work was on the new non-production box, the System/38, using RPG III and an inbuilt relational DBMS, later re-engineered to become DB2. An ex-IBM expert called Ian Smith performed an amazing job as a consultant setting it up, and was soon offered the chance to head up the IT department - except that in those days, of course, the term "IT" hadn't been coined yet: this was the DP (Data Processing) Department. Wonderful days.

And now? I'm writing this on a laptop on which I code primarily in Java, but also C#, C++, Frege, Haskell, Erlang, Python and Ruby (off the top of my head), while using MongoDB or MySQL or SQL Server or JavaDB for the persistence (object-relational mapping by hand or Hibernate, either way will do), and including web apps with EJBs and servlets and JSPs, with HTML5 UIs, including jQuery for the snazzy modern look'n'feel... Times have changed.

To anyone starting a software development career in 2015: how similar do you think IT will be in 33 years time - at the start of 2048 - compared to now? Buckle up, and carry on learning...

It's a good job that old notions of age making it more difficult to learn new stuff are plain wrong. For example: adults talk to children in a slow, exaggerated way when the kids are learning their first (or a second) language - and if language teachers talked to adults in a similar (not identical) way, the adults would pick up new languages as easily as children. (The problem isn't really teachers: it's adult natives of another country not knowing how to talk to people who are still learning the language. No one makes TV dramas for adults where the language use is deliberately slow and simple...)

Likewise, early studies of memory involved undergraduates - the experimental psychologist's test sample of choice - memorising lists of nonsense syllables, as directed by an academic. When the researchers wheeled in retired older people, with decades of work experience where relevance is materially rewarded, these test subjects had no motivation to perform well on nonsense memorisation, and did not view the academics as authority figures. (It was experimental psychologists themselves who came to recognise the unintentional bias in the methodology.) More recent studies show very different results.

And then there were the researchers who discovered old Eleven Plus papers in a Scottish archive, and realised they had a nice opportunity. These were IQ tests that school pupils sat, aged eleven, back in the old days - a practice that ended mostly in the early 1970s - and determined which kind of secondary education they received. (The inventor of IQ tests, Alfred Binet, did not believe that intelligence was a single, measurable thing, or that his tests should be used to categorise people for serious social purposes.)

The rediscovered test papers allowed researchers to find people in their seventies and get them to resit the tests, and compare the results. Guess what? A large group had increased their IQ by twenty points or more. (That's massive.) And the correlation? These were the people with intellectually demanding professions and/or considerable further education.

Learning new stuff makes you smarter... and that's not a tautology. You don't just take new cognitive material on board: you increase your ability to learn yet more.

I find a deep geeky joy in learning a new programming language, but hey, maybe I'm on my own. Again.

"That's all very well, John," I hear you cry. "But tell us about your books. Never mind computer programming and the novels you're reading... What are you actually writing?"

I'm glad you asked. Thank you. The idea for the new novel came to me in early 2010, and it's part of the reason I returned to the computing fold, having previously dropped my computing work to literally a couple of weeks a year (albeit with some seriously interesting clients). Finishing my postgraduate studies part-time at Oxford (having put them on hold back in the last millennium), and getting back to the leading edge of current tech, all integrated with planning to write a contemporary novel, heavy on the cyber security but for for the general reader as well as the specialist, to be started when the Ragnarok trilogy was finished.

The plan was to finish the book the last spring.

What I hadn't counted on was the need for a total rewrite, which is business as usual for the professional novelist, but stress-inducing for the writer who's planned for months of computer-related work and no writing... But hey, it's only hard work. I finished the rewrite and got the book to my agent a couple of days before Christmas. This being the first book I've written on spec since - gulp - the 1990s, it's now Out There in the hands of editors who with luck will be reading it in January and liking it enough to offer money so they can publish it...