Maybe I should use topic tags. Last time I looked, they were incompatible with the way I'd styled this page, but I could look again... At any rate, consider this post tagged: martial arts, physical training, general rambling.

Westerners performing dand/bethak training - aka Hindu push-ups and Hindu squats - are probably doing it because the controversial Matt Furey (re)popularised the notion. I've been training in martial arts since 1972, and lifting weights since '75, so I've a reasonable idea of how people trained in general, back in those YouTube-less days. (Although you can use YouTube to check out the legendary Kimura training judoka in the '60s: hundreds of dands every day. Likewise Japanese wrestlers and shoot-fighters.) 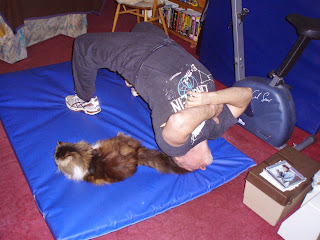 When I had a Links page on the main website, I used to link to an apparently respectable "fitness guru", until I realised how fake his credentials were, and how much he overcharged for the small amount of good information he provided. I removed that link, so I understand the notion of choosing your recommendations on grounds other than pure content. But from my entire bookcase and Kindle collection of training books, only Furey's Combat Conditioning changed my actual daily practice. Bear in mind, I already ran and lifted weights: anything new I learned could only be a tweak, and the books were more for motivation than knowledge. In those days also, Furey wrote that combining weight lifting and calisthenics was fine - he later changed his tune - and it probably helped that I bought his book in a bookshop, not as a result of his viral marketing (in magazines I never read). I judged the book purely on content, and the effect of actually engaging in that training for five to seven days a week, for years.

Since keyboard warriorship is clearly oxymoronic and unworthy of further discussion, I guess what I really wanted to say was that I'd never write approvingly about an exercise or piece of equipment if I'd not used it seriously for at least two years, and probably an awful lot longer. Bear in mind this comes from an old guy with a too-thick waist. My energy levels are high, but so is my coffee consumption, plus I've never quite grown up: bouncing around is what I do, and there's no guarantee it comes from hundreds of daily freehand squats.

While travelling, I take Bodylastics exercise bands with me, as a substitute for lifting weights. They have a door anchor and use carabiner clips, so you can attach multiple bands to the same handle or pair of handles. I like them a lot, and I've used them a lot over the last three years (up to 2 months at a time in a hotel, though I usually get home at the weekends, to my heavy bag and dumbbells).

I've owned a pair of Vibram minimalist training shoes for about nine months (they were a present), ran a few miles in them the day after I got them (not recommended by the manufacturers, but martial artists are used to training in bare feet), but only used them in the last few weeks seriously, while doing calisthenics and "hill sprints" up hotel staircases. So no verdict yet. Mostly, I'm no fan of buying new gear for the sake of it, or swapping exercise routines, or even training in the usual kind of gym, where everyone's nicely dressed, talkative, and enamoured of their phones or interactive screens mounted on or above the treadmills and exercise bikes. That's partly the getting-old thing, I suppose, but my personal workout music - I've mentioned this before - is rap and hip-hop, with Rocky themes just for a touch of nostalgia. I'd like to think I'm not entirely superannuated.

To my mind, not critiquing something until you've tried it seriously for a serious period of time - I'd been performing dands, bethaks and neck bridges for a lot longer than two years before I ever mentioned them - links to the common courtesy of never insulting another martial art. I say "another", because it's the adherents of one art who are most likely to put other arts down. I first came across this phenomenon in an aikido dojo that I visited for a single session in the 1970s: the instructor was physically proficient and tough... and rude about other styles. I never went back. By contrast, Juliet McKenna's aikido dojo, when I visited a few years back, was an excellent place to train.

Likewise, BJJ. In a sports centre near where I used to live, I wandered over to listen to a BJJ coach (not the regular instructor) boast about how he'd wiped out some non-jiu jitsu fighters at a BJJ tournament - he used exceedingly derogatory language - with no mention of the fact that they were the ones who'd dared to enter a competition whose rules were entirely alien. He also proceeded to teach some gymnastic, spectacular techniques that I would classify as low-probability, sport-only movements. I never trained there at all.

On the other hand, when I turned up at a Gracie Barra gym - where the guys had one hell of a lot more impressive competition credentials than the rude bloke - the techniques were practical, and everyone was very nice to me. Even the huge bloke who sat on my chest for the duration of our encounter when we were rolling... He apologised afterwards, on the basis that he hadn't realised it was my first-ever Brazilian Jiu Jitsu session. Toughness and politeness in one package.

Seems to me, that's how things should be.

So I dunno... When I'm away from home and teaching a grad programme (which is pretty much 100% of the fee-earning work I do computing-wise these days), I take my heavy-duty laptop and a large bag containing workout gear and hardcopy books and A4 folders full of notes and diagrams, besides the usual essentials. At least I did until last month, when I tweaked my lower back as I lugged the stuff up and down Tube station stairs.

Throughout my 20s and 30s, when my only strength training was on the weights, the odd back injury was no surprise. Or you could say, I should've trained smarter. For me personally, though, it was the addition of calisthenics (Hindu push-ups, Hindu squats and neck bridges) that largely banished such injuries, so I was a little miffed when my back said ouch. Part of my response, since I had to travel again the next week, was to lighten the load I carried... and part of that was to order my very first Kindle, specifying next-day delivery.

Ah-ha, Meaney. Coming to the point at last, are we?

Despite my love for dead-tree books, text books included, I've had a variety of Kindle books on my laptop for several years - over a hundred books - but never found it a satisfying experience, particularly in regards to fiction. I've bought Kindle readers as presents, but this was the first time I'd bought one for myself.

Since I teach computer science graduates as well as grads of other disciplines, I'm aware that part of preparing them for the cut and thrust of projects is creating an awareness of the differences between the worlds of business and research. The former includes risk analysis and management, which means not letting the cutting edge sever your arteries: unless there's a compelling reason in terms of being first to market, you might want to wait until the bugs have been fixed in whatever technology you'd like to adopt.

Hang on... Aren't you always going on about learning Haskell and keeping track of the new stuff?

Well, yes... But keeping track of the leading edge is different from using it in projects. It's more in line with being an eternal student, and it applies to computing and martial arts both, or can do: Dan Inosanto, the doyen of jeet kune do, was fifty-eight when he took up Brazilian Jiu Jitsu.

I'm fifty-seven and three-quarters, and that's enough of that.

So anyway, my brand-new Kindle is seventh generation, which makes it thinner and lighter than its predecessors and something of a joy to read. A month later and here I am, with over a hundred and thirty books in my pocket, weighing practically nothing...

You said over a hundred. Where did the extra thirty come from?

I might have gone a little over the top purchasing new books. The point is, it's an SF future brought into the present, a true pocket library, and a joy. And if you've read my early books, you might have noticed that a happy scene with lots of laughter is sometimes the set-up for a cataclysm. So this isn't entirely a happy story, because I finally got round to catching up with the news from Borderland Books in San Francisco, to discover they're closing down, victim of the current book trade environment, with a local change in legislation being the final straw that means the business is no longer viable.

One way or another, progress kicks you in the @$$. We're all caught up in the tides of history, and if we avoid tsunamis, it's probably down to the laws of chance.

Anyway, I'd like to proclaim public best wishes to Alan and Jude and the rest of the Borderland gang, and hope they do well. (If I were living in SF, I'd back Alan Beatts for mayor any day.)

Somewhere I've got a photo of Alan performing his party trick with a coat hanger: passing his entire body through it. From the tips of his fingers to the tips of his toes... It's the least of his talents, of course. He's rather more dangerous than you'd probably expect.