And just in time for the holidays, my new contemporary cyber thriller... 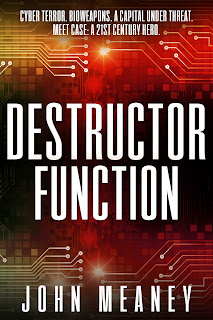 When terrorists use cyber attacks and lethal bioweapons, who is going to defend you? Keyboard warriors? Intelligence officers? Special-forces operators? More often than the public knows, we need them all.

Sometimes the cyber geek, the spy and the fighter are the same man. Or woman.

When his best friend Fuad commits suicide on his wedding day, it seems unconnected to Case's investigation of cyber intrusion at a NATO airbase. But Fuad was a security specialist at a London bank, and a near-identical suicide inside the Air Force begins a hunt that leads from idealistic hackers in Berlin and Stockholm to manipulative psychologists and organized crime within the Moscow establishment, and a stolen Soviet-era virus without vaccine or antidote. But behind them all lies a combat jamaat, a jihadist group whose first target is going to be London, with a death toll that may eventually reach millions.

Can Case and his formidable senior partner Kat, both operatives of IACS - pronounced Eye-Axe - track down and stop the threat before masses of people begin to die?