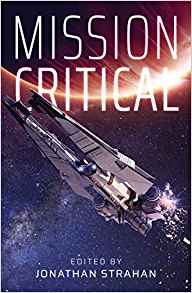 The rather marvelous Jonathan Strahan has produced an anthology of mostly hard SF stories based on the theme of Stuff Goes Wrong and "We're going to have science the s**t out of this," which was a terrific idea.

All good stuff, coming to a bookshop near you on 9th or 11th July, or thereabouts, depending on which country you live in. Hope you like it!