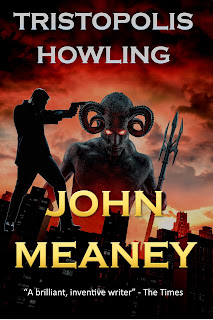 From award-winning author John Meaney comes a thrilling tale of Tristopolis, a Gotham-like city beneath perpetually dark skies, where the bones of the dead fuel the reactor piles, indentured wraiths power the elevators, and daylight never shines.

There’s no such thing as ghosts, not even in Tristopolis, and zombie detective Donal Riordan knows it. So when his dead lover appears in his boxing gym, he knows that something dangerous has arisen. But the threat facing him and his new partner Mel, and perhaps the entire world, is of eldritch origin and far more powerful – and stranger – than anything he’s faced before.

Without his former colleagues to help him, can he even survive the day? Or is Tristopolis doomed?

...And for Tristopolis Requiem, a bit of re-branding to match: 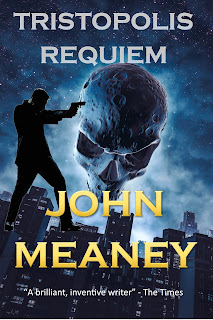 Do you dare to read them after dark?

Call yourself a physicist?

Back when I was a physics undergraduate, I missed an evening lecture that formed part of a series given by various visiting academics. (I was probably in the weights room or the dojo.) I'm pretty sure the lecturer was Professor John Taylor of London University, the year was 1975 or '76, maybe '77, and the subject was black holes.

(I used to own a copy of Professor Taylor's 1973 book on the subject. It might be around here somewhere.)

So I wasn't there, but I heard the next morning what happened. In the Q&A at the end, one of the final-year undergraduates stood up and asked the question: "Call yourself a physicist?"

Because, of course, the idea that black holes might actually exist was... bonkers.

And today, Professor Roger Penrose, whose theoretical work nailed the entire concept, has won the Nobel Prize for Physics, along with the two researchers who, in the 1990s, found that a humongous massive black hole sits at the centre of our galaxy.

I've read some of his stuff, certainly made use of Penrose tiles in a scene in Paradox, as I recall, which I wrote two decades ago. Gulp. Time, entropy, all that.