I quite like the WandaVision TV series, maybe in part because I'm old enough to remember the Dick van Dyke Show: if you haven't watched the series, you might not be aware that it begins in a "reality" modelled on 1950s TV shows. (And this would be a good point to exit this blog post if you want to avoid spoilers.... although Stephen King once said that spoiler alerts are for wimps.)

The name Agatha Harkness rang a bell for me, even though it was January 1970 when she first appeared in Fantastic Four issue 94. My copy shows the price as 15 cents, so it was a US import instead of a UK reprint. My copy of issue 93 shows the price as 1/- (in other words, one shilling), so the changeover to decimal currency from pounds-shillings-and-pence might have had something to do with it.

Back when we had real money. 12 pence to a shilling, 20 shillings to a pound. Thrupenny pieces (worth 3d, i.e. 3 pence), sixpenny pieces (aka tanners), and shillings (bob). A two-shilling coin was also called a florin. Two-and-six was half-a-crown (half crown coins existed, like ten bob notes). Pennies and ha'pennies (half-penny coins). Farthings (quarter pennies) had been removed from circulation years before, but you still occasionally saw the physical coin, even though it wasn't legal tender.

For further musings on my clearly advanced age, see the previous post... In this post here, I was intending to mention Agatha Harkness, who looked like this: 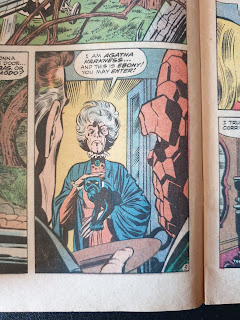 And for a total spoiler, the issue ended like this (with the Frightful Four defeated by the old lady herself, while the Fantastic Four were incapacitated): 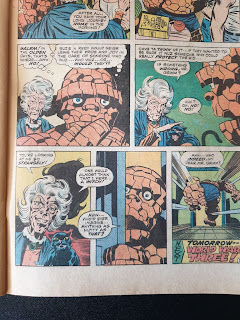 I'm not a proper comics geek: I only hung onto a few comics from the Old Days. But still, nostalgia...

And speaking of Vision, which we nearly were... In the first Captain America movie, in the 1940s expo where Howard Stark is presenting, you can see a frozen red man-shaped (and man-sized) figure in a glass display cylinder. That looks like the original Human Torch, a character who was around before Johnnie Storm took that superhero name, and who was actually an android.

In the comics, it was that android's body that became, or was used to grow (I can't remember which) Vision's body. I don't think Ultron had anything to do with it, although I might be wrong.

I do remember Ultron in the mags, though. At the end, when you see Ultron's lifeless head lying in a sandy waste, you also get the famous Ozymandias poem in full. I learned it by heart (and still know it word for word) from that comic book, not from a poetry book. (That's not an issue I still have, though.)

Maybe not a true fan, but no anti-comics snobbery from me, folks.