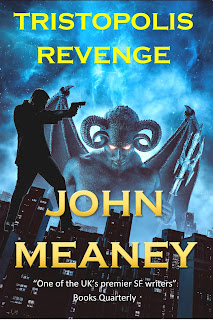 From award-winning author John Meaney comes a thrilling tale of Tristopolis, a Gotham-like city beneath perpetually dark skies, where the bones of the dead fuel the reactor piles, indentured wraiths power the elevators, and daylight never shines.

Tristopolis has faced eldritch dangers before, with resurrected cop-turned-PI Donal Riordan at the forefront of keeping his city safe – but this time it's the ones he loves who face the deepest risk. Will he be in time to save them? Or will the only thing left be revenge?

I'm still having a blast writing Donal's adventures on that weird version of Earth. Hope you enjoy this one too!

Tonight (8:20pm BST) the Earth will be angled so that we'd get equal-length light/dark periods if only it stayed that way. In the universe of the Tristopolis books, of course, the Earth's orbit and axial rotation are phase locked, like Mercury.

Tristopolis Revenge will be out very soon...

Meanwhile, thinking of time's passage (cue Al Stewart songs here): in the first or second week of September 1972, as a 15-year-old non-athletic geeky schoolboy, I stepped onto a judo mat for the first time, and knew I'd come home. By the inexorable logic of simple arithmetic, I am now commencing my 50th year of training. And my feelings about that are... complicated.

This photo of me is from the early to mid-90s, perhaps half way through that half century of martial arts, taken in the Marshall Street dojo of the late great Enoeda sensei. 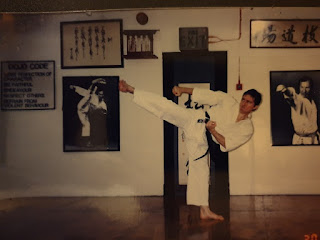 I could wax lyrical. Around the corner from Carnaby Street, you reached the old Edwardian swimming baths, climbed a hundred or more steep stone steps to the upper reaches of the building, to the full-time dojo. The repeated kiais of the lower-grade class would echo down the stairwell, and along the street outside. Subliminal scents of sweat and adrenaline, and perhaps a little blood, strengthened during the ascent.

Once, in my early days of training there, I turned up early, got changed into my gi, sat down in the changing-room without having seen anyone else, and thought: "I could just change back into ordinary clothes and leave." Because, despite being a black belt for over a decade at that time, what I experienced in that dojo was an intensity that I'd never have imagined before actually immersing myself in it. For intensity, read fear...

Of course I trained that night regardless, and many other nights besides. I loved that place.

Another anniversary of sorts: in August 1996, while at the Worldcon in Los Angeles, I got a fax in the middle of the night from my agent, telling me I had a book deal, my very first. In October that year I actually signed the contract, so this is the 25th anniversary of the midpoint between fax and contract proper.

It wasn't until Easter 1998 that To Hold Infinity hit the shelves, by which time I was nearly 41 years old. As a senior consultant for the largest tech consultancy in Europe, I wasn't exactly dying to give up the day job... That just wasn't going to happen. If anything, my day job grew more interesting than ever. ("John, could you just nip over to Paris to check out the software engineers making this product?" "On my way, boss. Et ouais, d'accord.")

Here I am, signing To Hold Infinity when it was launched at Eastercon. 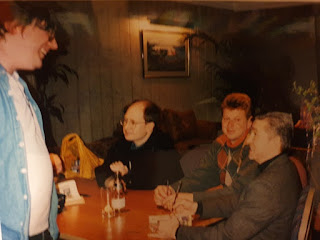 That's Steve Baxter and Peter Hamilton at the table with me, while I do believe the gentleman standing on the left is Simon Bisson, whose articles on Infoworld I've been reading very recently.

The original working title for the book was Summer Storm, Winter Flower. Then I changed it to Twisted Skein, before settling on To Hold Infinity. My New York sub-agent said he couldn't comment on the choice, because he wasn't good with titles. My UK editor said: "Old Blake is always good for a book title, isn't he?"

Was I too clever with allusions and Easter Eggs in my first few books? I still don't know.

Example: there are 36 chapters in To Hold Infinity, and each begins with a haiku. If you join the haikus together, matching the last word of one line with the first word of another haiku's line, the 36 haikus join together to form a tesseract (aka a hypercube). And the impact of holographic displays on alphabets and writing is a little tangential theme in the first couple of books.

Too clever by half? Probably.

Also too much dwelling in the past today. I think I'll just go to my dojo and train. Cheers!