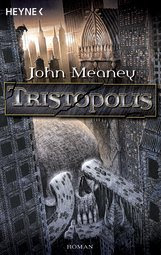 CARRIED OVER IN TRANSLATION...

You knew that 'translation' comes from 'trans' = 'across' and 'ferre' = 'to carry'. Well, obviously. (Actually the Latin verb's about as irregular as you can get, and the past participle is 'latum'.)

The little passage in my previous post, on transatlantic translation (ha!) was not an extract from any of my books or stories, but just a hasty example. Clunkiness disappears during rewrites -- we hope -- and right now I'm deeply into the Dark Blood rewrite.
A couple of days back, I received my copies of TRISTOPOLIS, being the Heyne-Verlag German edition of Bone Song, as translated by Peter Robert. Just dipping into the book tells me that Peter has performed a marvellous job, as I expected after we'd swapped emails during the process.
Just looking at the first page, when Donal looks up at the dark tower which is Police HQ, the English edition reads (three paragraphs down):

"Son of a bitch," he muttered.

From the shadows came a low growl.

This isn't a literal translation, but it is an exact translation. And it was just the first example I noticed. (And I absolutely do not claim my German is good enough to pick up all the subtleties.)

I realized a while ago that if I bought DVDs of American movies while in Germany or Switzerland or France, I would have the local German or French soundtrack in addition to the American. A good way to practice languages. From home, I simply go to amazon.de, or amazon.fr. Technology rules.

See, my German might not be good enough to follow the movie first time, but if I've already heard it in English, then I'll pick up a lot more.

And here's the really neat thing. Once I've finished the Dark Blood rewrite, I'm going to sit down and read Tristopolis all the way through. What a fantastic treat, to be able to work through a language lesson based on my story!

I was overjoyed to get the chance to create a US version of Bone Song. The city of Tristopolis is such a Gothamesque setting that it deserves a proper US-English text.

When I tell Brits that I write my short fiction in American English when it's for a US market... they're horrified. Hmm. And the thing is, most people underestimate the differences. Change 'colour' to 'color' or vice versa, and they assume that's it. So how about examining the following story fragment.

Jack ground out his fag beneath his heel, and looked around the darkened car park.

Opening the boot of his car, he pulled out a jumper. Despite the chill autumn night, he was wearing just a vest, no shirt. He pulled the jumper on.

There was a sound behind him, and he span.

A motorbike, looking as if it had travelled far, had just pulled up. Beyond, on the street, a few pedestrians were walking on the pavement, but the tarmac was empty.

As the biker dismounted, Jack began to rethink his policy of ‘one hit, one kill’. This bloke was a big bugger. Some day, Jack might get to fight someone his own size. But not today.

Jack ground out the cigarette beneath his heel, and looked around the darkened parking lot.

Opening the trunk of his car, he pulled out a sweater. Despite the chill fall night, he was wearing just a tank top, no shirt. He pulled the sweater on.

There was a sound behind him, and he spun.

A motorcycle, looking as if it had traveled far, had just pulled up. Beyond, on the street, a few pedestrians were walking on the sidewalk, but the pavement was empty.

As the biker dismounted, Jack began to rethink his policy of “one hit, one kill.” This guy was a big bastard. Someday, Jack might get to fight someone his own size. But not today.

You'll notice that period (full stop) immediately follows the word "kill" in the US version (following the same rule as for dialogue) but follows the closing quotation mark in the British version. And there's "someday" vs. "some day" and lots of other stuff.

In Britain, as in other European countries (!), a three-storey building consists of the ground floor, the first floor and the second floor. In the US, a three-story (note spelling!) building has a first, second and third floor. And so on.

...is expanding. I've had the beginnings of a MySpace presence for a short while. Please do check out my MySpace page, which will continue to evolve. 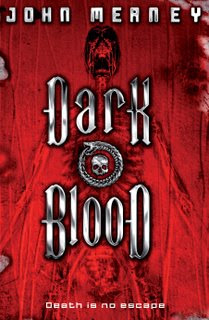 ...is the name of the sequel to Bone Song, and I'm hammering away at revisions before a ghostly figure comes hammering at my door and howls: *IS IT READY YET?* Or perhaps that's the fear speaking.

In February, the UK paperback of Bone Song comes out, just as Bone Song makes its official US debut. Previews -- in the form of bound proofs -- appeared at ComicCon in SanDiego, thanks to Juliet Ulman and the wonderful folk at Bantam. And I've received most excellent feedback from the first US readers, thank you!

And my wonderful British publishers, Gollancz, with the gorgeous Simon Spanton (!) being my editor, already have the artwork for Dark Blood. What do you think of it?