With your indulgence, I'd like to insert here a posting I made in the NLP Connections forum, to a thread discussing the methodology behind science, and string theory in particular. It produced some nice reactions in that venue. So I thought I'd give you a minimally edited version, and then explain the jargon afterwards, if that's all right with you.

Most members of that forum will be familiar with the saying ('presupposition') that "the map is not the territory," and probably a sizeable percentage would recognize it as originating with Korzybski. What I wanted to demonstrate was that this presupposition, along with the spookiness of quantum physics, does NOT support the worldview that the nature of reality is determined entirely by our beliefs. Here goes...

Since every scientific theory (or hypothesis) is a model, when someone uses a list of criteria for judging whether a theory is good, they're utilising a metamodel. And I suspect most working scientists possess a metamodel that encompasses both Korzybski's presupposition and Popper's notion that a theory is never 'true', just not disproven. That de facto metamodel includes testability as a key criterion . . . or you've no way of knowing whether there's a structural similarity to reality. Isn't that empiricism the qualitative difference between scientific knowledge and all other forms of human enquiry?

There's an extra clause in Korzybski's original sentence, referring to the fact that the usefulness of a map lies in its structural similarity to the territory. That's extremely important . . . perhaps the difference that makes a difference.

Of course, the title of the thread contains a very generalised nominalisation -- "science" -- while making a point about string theory specifically. (That's fine . . . we're all friends here!) Just to broaden the scope briefly, it seems to me -- er, subjectively -- that some people take our favourite presupposition all the way to solipsism, as if any map is a valid one. That's not so.

Inaccurate maps aren't useful. Can I go off on a brief tangential rant? (Or is that a ranting tangent?) Let's say you're used to reading a map that depicts rail stations as black circles. Then you try to find your way around a strange city using a map drawn by a cartographer who uses black circles to represent something else entirely . . . You've gotten lost by presupposing that the symbol retained its meaning from another context.

I think this is one of the main reasons why popularisations of quantum theory and genetics are misunderstood. Just as 'power', 'force' and 'energy' have specialised meanings in classical physics, so (arguably) does the term 'uncertainty' in quantum theory, and 'a gene for a characteristic' in genetics. When a non-specialist goes off on a transderivational search to attach meaning to such words, they may come up with meanings very different from the intended message.

For example, [a forum member] reframed some of your first post to include the words "anything is possible". This is a natural inference from Korzybski's sentence; and some people infer something similar from quantum theory (since it deals with probabilities). And yet neither is so . . . "The map is not the territory" presupposes that there IS a territory; and there are many, many possibilties that quantum physics excludes. (Sodium lamps can shine only orange. There are always dark bands in an interference pattern, where photons/electrons may NOT go.)

Objectively speaking (!), subjectivity has to operate within external constraints, or it becomes delusional.

Back to tying string theory in knots . . . Experimentation is the act of sending out a surveying team to check that a small piece of territory is structurally similar (VERY similar) to part of a broader territory's depiction on some map. If some abstract piece of artwork can't be used to find a route around a landscape, then the artwork isn't a map, though it may be pretty to look at.

The question is whether string theory is like a crazy abstract painting, or merely a satellite photograph taken from so high up (using unusual wavelengths rather than normal colours, perhaps) that it's difficult to see where to start and what to survey . . .

Jargon translation: In General Semantics, there's the notion of a ladder of abstraction (if I remember the term correctly, from decades ago). You know what I mean. Er... "Apple" isn't abstract, "timeliness" is, "honour" even more so. How about "professionalism" or "robustness"?

All of these words conjure up different representations in different people's minds. When such abstractions are causing problems, they often come in this form: "I can't help my anger." "Fear prevents me from succeeding." In this case, it can linguistically be useful to think of these abstract words -- anger, fear -- as referring to processes more than things. In NLP, the jargon for this is 'nominalization'. (Fear is something you do, not something in the world outside.)

Those two sentences contain other 'meta-model violations' in addition to the nominalizations, but let's save that for another day, along with a discussion of how, precisely, being sensitive to nominalizations and other linguistic clues offers the possibility of changing someone's life with a few well-chosen words.

The 'meta-model' is one of the NLP models of language, which is itself a model. Have you come across the UML metamodel in software design? Same kinda thing.

Oh, there was another piece of jargon: "transderivational search." That's the mental process of attaching meaning to a word, on the basis of subjective experience. To someone trained in reading microexpressions (including the eye-movements known as "accessing cues") it's possible to watch the search in progress, as the person sifts through images (for example) and then accesses an internal feeling (a kinaesthetic reference) to check for correctness. Just think Hari Seldon, Second Foundation, with a dash of Bene Gesserit . . .

So back to the point of the discussion . . .

I understand why "reality is what you make it" can be empowering. For most practical purposes, it's an immensely powerful base to operate from. The symptoms of (unipolar) depression and the symptoms of learned helplessness (a condition first identified by Seligman, doyen of positive psychology) are identical. People who feel trapped in their jobs or other circumstances are operating within an impoverished model of the world . . . It doesn't matter whether you dream of being a writer, a philosopher, an athlete or a painter or anything else -- it is possible, because people facing the same challenges as you have achieved them.

And while it may take time to learn skills or train yourself to a sufficient level to realize your goals, any barriers to stepping onto the right path can be cleared away in an instant. At the speed of the thought.

So why am I arguing against pushing the principle all the way? There are two reasons. One is the incorrect use of science (or Korzybski's rational notion) to shore up a philosophy that it doesn't logically support.

About a year and a half ago, I was visiting Maggie and Eric Furey, and I was watching a film you may have heard about or seen, called What The Bleep Do We Know? When Eric and I started watching it, he framed the experience by saying that he'd be interested in what I thought of the quantum physics basis of the philosophical ideas. By the time Maggie entered the room, I was being negative (and I think she was taken aback, just a little).

But I'd started from the frame set by Eric, and so to me the ideas were pretty but not supported by physics in the way that I thought the film implied.

Beyond that, there's another reason. If the nature of reality is the result of our beliefs, then we're all directly to blame for the geopolitical mess and climate change. And just how do differing beliefs interact with each other? If the laws of physics operated according to human belief structures, why aren't the properties of spacetime different in different countries? It's a preposterous notion, of course.

So take heart, my friends. I don't think you can jump a thousand feet into the air in the next five seconds just by having a strong belief, but I know your dreams can be true.

Last night I attended an impressive talk by a fellow called Gabe Guerrero, taking time out from teaching a course on advanced language patterns... in English, and his mother tongue is Spanish. At school, he was told he'd never be able even to speak English. But limiting beliefs are only illusions, and you can always learn new ways of doing the things you've tried to succeed at before.

And who, knowing the unathletic child I was, would have predicted a lifetime of martial arts and such weird practices as swinging a heavy yellow kettlebell around in the air?

Per ardua ad astra, everyone. The stars are yours. 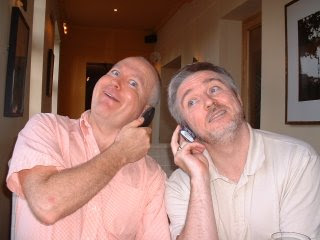 So did I miss October? Did we have one? What happened?
That's me ringing my bro Colm to find out . . . Well, okay, no, we were in a restaurant together acting grown up and sensible. Sober-minded as always.
So, what did happen?
I handed in Dark Blood (the final draft) on time, during September. Blogging while the book was in progress . . . that was fine, as you can see from previous posts. But October was the month in which to work out What To Write Next.

So, sorry, but no random thoughts made it as far blogspace, because everything went into the subconscious cookpot, until I was able to outline several new projects. One of them I almost had, but wasn't quite there. And when you're in that state, and Paul McKenna just happens to be on the phone and says, "I can help with that. It'll only take a few minutes," what can you do?

So a few minutes trance, a good night's sleep, and next morning I outlined a complex book called Resonance. Wow.

It's only one of several projects, and I'll keep ya posted as they develop.

And how are your dreams developing?

AN IT HARM NONE, DO WHAT YE WILL.

I was shocked to hear of Carol Philpott's passing away last week, so soon after our last meeting. Yvonne attended the funeral today, and I'm sorry I'm far away.

Well known in fandom, married to John Philpott, she was wonderful, and a terrific example of the virtues she believed in: mirth, reverence, honour, humility, strength, beauty, power and compassion. May the Goddess keep you safe until the time of rebirth, and beyond.

Be at rest, be well.