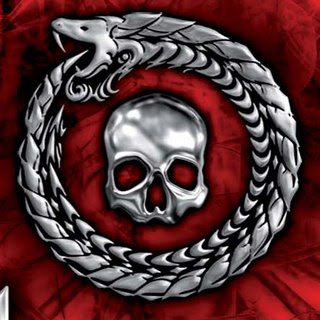 There is, or used to be, a long-running ad in some US martial arts magazines for a system called Target Focus Training. What's interesting is the provocative headline, which goes something like: IMAGINE TWO PEOPLE LOCKED IN A LIFE-AND-DEATH STRUGGLE, ONE PERSON'S HANDS TIGHT AROUND THE OTHER'S THROAT. WHAT DO YOU DO NEXT?

Along with the sub-heading of: Whatever you've answered, you're probably wrong.

Anyway, as I think about writing, I'm reminded how rarely SF uses the first-person viewpoint compared to other genres. Private-eye fiction used to be entirely first person; nowadays there's a new form, wherein one character's story is told from first person (through their eyes, feeling their feelings) while others are from third person (not omniscient third person, but dipping into the thoughts and feelings of the viewpoint character).

The first time I came across this structure, I hated it... It seemed a lazy form of writing, to take a simple first-person story and pad it out with scenes from the characters' viewpoints. However, both Robert Crais and Barry Eisler switched to this technique at the same time as they raised their games to new levels, and I enjoy their books very much.

Recently, screenwriter Adrian Reynolds has been discussing with me the psychological processes involved in writing. One of the things I'm aware of is that I can visualize a scene, move around inside it (like a form of lucid dreaming... which it is) and when I'm moving into a character's viewpoint, I'm moving the observer/feeling part of me into that person's body. And I wonder how much our internal visualizations are influenced by cinema and other modern media?

I've also stated in a recent interview that music -- whatever you want to listen to, whenever you want to listen -- is the thing that separates modern writers from our antecedents, even more than using keyboards instead of pens. Because listening to music at the write time (!) every morning is a brilliant, powerful and effective way of dropping you into exactly the right state to continue with your story.

So what about that advert? Does it help if you know that the system being advertised is one that concentrates on real-life self defence, rather than traditional martial arts? (By the way, I think the actual advertised methodology is a good one, worth adding to other practices, not replacing them. That's just my opinion, though.)

Remember, the scenario was two people locked in a life-and-death struggle, one with their hands around the other's throat. The question was: What do you do next?

My answer, when I read it?

It was: SQUEEZE HARDER!!!

Be safe, be confident, be powerful, my friends. 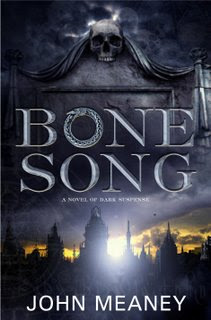 BONE SONG IN THE US

If you, like me, get excited when new books come out and people say nice things about them, you can share my feelings about Bone Song's debut in the US.

Right now, Yvonne is in Los Angeles, featuring in one of Paul McKenna's TV shows (he's a household name in the UK, and the number-one non-fiction author, and poised to take the US by storm). So she rang me up on her cellphone (sorry, fellow Brits, I mean mobile, or Handy to my German friends) to say she'd just taken pictures of Bone Song on the shelves of a large bookstore. Excellent! And my most wonderful US publishers, Bantam, have put animated ads on various important websites, which I like very much.

Excuse the lack of blogging recently, and brace yourself for the deluge as the new-look website really is about to go live, and I've been storing up things to say...

Be well and fly straight, everyone. 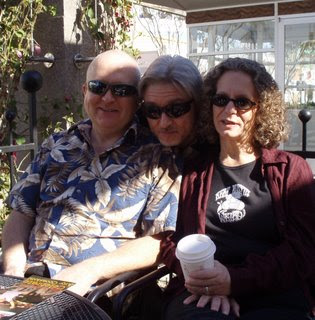 Had a wonderful visit to Arizona during January, failing to meet up with my fannish friends, but staying with my bro and his other half, the wonderful Leslie. Sometime during the visit, Yvonne ran her second marathon. I ran half and staggered half, which means I got to the finish on the same day I started...

The event was the PF Chang Arizona Rock'n'Roll Marathon, with live bands playing en route, and energetic cheerleaders to pass on their vigour by the magic of resonance. It was superbly well-organized. With a 7:40am start to avoid the worst of the heat (at least for the fast runners!), volunteers on race day were working from 3am to get everything set up. Terrific job.

Even knowing the theory of cold desert nights due to lack of cloud cover, it's still a surprise to have to wear extra disposable layers at the bitter, freezing start to a race in the Arizona. See? Palm trees in the background, and me well-wrapped up in extra gear. 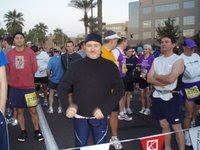 It reminded me of the Boxing Day race in December, in the Welsh seaside town of Porthcawl, which Yvonne and I ran. That race was interesting, in that the organizers guaranteed -- before the event -- that a world record would be set by one of the runners taking part. How could they possibly guarantee such a thing?

No pressure, but Colm worked out the answer to that conundrum in under ten seconds. Nice one, bro.
He also took us out to explore the desert, which we've done before. It was nice to visit the saguaro cacti again. I love 'em. 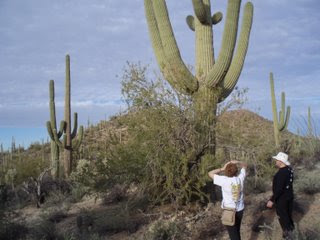 That's Yvonne and Colm saying hi to a saguaro. The cacti don't even begin to grow branches until they're 75 years old, so you can estimate the age of these specimens
January was a month of wonderful events, and I'll tell you more later about the terrific writing workshops I led at St Margaret Clitheroe Primary School -- they invited me back, and it was an honour.

In the US, the paperback edition of RESOLUTION is now out, and you can order it online from Amazon or Barnes & Noble, of course.

Lots more happening in February and March book-wise, on both sides of the Atlantic.

And the race with the guaranteed world record?

The organizers swore it was the first official 38-furlong race, so whoever won it was going to hold the world record for that distance. (It's about 4.75 miles.)

For British readers aged 50 and over, who can remember how many perches, rods or furlongs make a mile? For everyone else . . . I swear I'm not making it up. Honest. Really.

Oh, and since January is now over, it's time to make the resolutions that you will be able to keep, within realistic limits. If you swore to train hard in the newly-joined gym and you've not been going, throttle back and consider exercising at home, with shorter, less intense sessions than you'd planned. Like that. Worth it, don't you think?