At the Forbidden Planet Megastore in London, 6pm till 7. See you there!

Back in the day, one of my regular tasks while working for Big Software House was to accompany the salesman to potential clients for techie software products - things for which the users were software developers. The least technically interesting product was a version control system for IBM midrange kit. Nowadays, everyone uses version control software, but then, not a single company we visited had something like that in place - and I'm talking about the major retail banks!

Incidentally, when I worked for Skandia Life 30 years ago, we had version control software and code generators and lots of stuff that people take for granted now - it's just that we wrote the utilities in house.

So this wasn't all that interesting technically - it's just that whenever I set up the pilot, I'd begin by asking, "You do have source code for all your live production software, don't you?"

The answer was always yes, and I soon learned to snigger, but covertly. Not a single installation - in the banking sector - could find source code for every live program. Not one.

(They'd usually find a copy in a developer's environment that probably matched the compiled production program. But there would be some programs for which they had to create a dummy blank source file. Yikes. Your bank is running a program and they can't tell what it does... And before you say 'decompile' or 'run a trace', in that environment you couldn't: part of the proprietary security aspects of OS/400 and precursor OSs.)

So why the stroll down Memory Lane? I've noticed, by chance, geek wars between those who swear by a product called GIT, and those who would damn the former group to hell while pledging their allegiance to something called Subversion.

Now, I've never seen, touched or done anything else with either product. But. If you're going to flog a product in foreign markets, should you not do a little research regarding your product's name?

For non-Brits: in the UK, the word 'git' is normally preceded by the words: "You stupid..."

Ah, the weighty matters that I spend time pondering...

Or you might say, for ****'s sake... but it's not serious! I've put an art page on the website (see the button on the banner at the top of this page), so you can see what I did during some idle moments in the 80s.

Yes, it's Return to the Forbidden Planet. That's the megastore in London.

I'm signing books on Thursday 23rd June, next week. I'll have eight friends with me, too. At the moment the event page shows the Dark Blood cover, but it's cool... there should be lovely paperback copies of Absorption on hand. 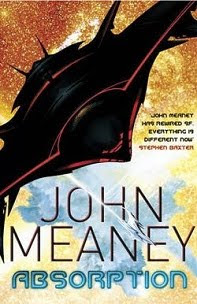 The attending authors are:

The fun lasts for an hour, 6pm to 7pm. I'll be up for some socializing afterwards, but not for a huge amount of time - I'll be travelling back to Wales the same night.

Back in another reality, one of the above authors attended one of my object-oriented analysis and design courses, before they made their first novel sale. Can you guess which one?

Amid the hard toil of solitary writing, it's nice when a highly regarded copy editor has something like this to say about your book, in this case Transmission: "What an extraordinarily adroit piece of storytelling! I'm in awe of someone who can control so much plot so well."

I've raised my game from volume 1 of the trilogy. All I have to do is (gulp) bring it all together in Resonance.

Do you know about the TED talks? Those annual lectures YouTubed to the world? And besides the main event, there are self-organized similar events at various locations, including Cardiff.

Here, from April, is an up-to-the-minute revisiting of the Fermi Paradox from some guy called Alastair Reynolds. Don't I know him from someplace?

We took the Most Marvellous Cats In The Universe for a check-up on Wednesday - that's Nutmeg (aka Captain Bonkers) and Bonbon (aka Princess Bonbon, the most beautiful being of all time). And as with all check-ups, what you're waiting to discover is the results. So here they are:

Bonbon: You think you are going to take my blood? Really?

Well, a bit grey and misty round the mountains, but that's fine by me. Today's achievements: wrote (natch), read first 50 or so pages of Winslow's Satori, worked out...