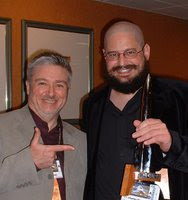 Now you already know this man is brilliant, but when I met up with him at Easter (not pictured -- that's from Glasgow, 2005), and I pointed out a particularly unique achievment of his, he said no one else had spotted it, as far as he knew...

So look, you've bought Halting State, haven't you? Take a look at the cover, if you have the UK edition from Little, Brown, and see if you don't recognize one of the pixellated guys on the cover.

I mean, has any author of any genre, never mind SF, been the model for his own cover art before?

All hail Charlie, king of the posthumans.

...I'd say mature friends, but heck, that makes it sound as if we have to grow up. That is optional, isn't it?

So less of the philosophical essay and more of a dear-diary kinda post, this time round.

Last weekend I caught up with friends from way back -- Justine Fidler (as she is now) and new hubbie Steve -- and Sally Burns and Bill Hamilton. Good to see y'all. Also Sylvia and David. Hugs, everyone...

Earlier that week, I got to meet that excellent thriller writer Barry Eisler, breezing through London on yet another global jaunt. Apparently he has to do loads of exotic travel in order to be able to write.

Also met up with writer/editor Bridget McKenna (close friends from way back when) and screenwriter Adrian Reynolds (first meeting in realspace).

And of course at Eastercon, there was renewal of old acquaintances. Great to catch up with China Miéville and Jessy, with Joe Abercrombie, Chris Wooding (that's the three of us, pictured) with our minds completely unaffected by the evil spirit summoned by the three witches overhead -- er, I mean the three princesses of fantasy fiction -- Jaine Fenn, Suzanne McLeod and Alex Bell. Also great to hang around with Ian McDonald and his missus Enid. And everyone else.

I also made contact with some harder hitting friends, having found a new kickboxing gym to train in. Cuts and bruises heal, I'm glad to say. Especially when you're young like me... 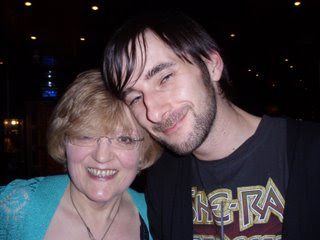 So speaking of publicity, here are some recent interviews with yours truly. First, I talked with John Joseph Adams about Bone Song at SciFi.com.

And then Sandy Auden and I chatted about Dark Blood at the UK SF Book News Network.

And I had a very nice time. Ta lots to John and Sandy, both. 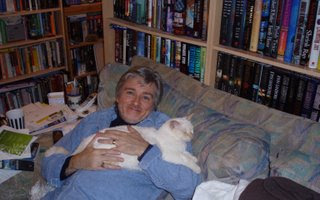 YOU CAN'T STEP INTO THE SAME RIVER TWICE.
That was Heraklitus pointing out that every situation is unique, and change is constant. You've read van Vogt's World of Null-A, right? (Or maybe not, and I'm showing my age...) Non-Aristotelian logic recognizes that uniqueness, while Aristotelian logic is about generalizations and categorization, which are essential to human reasoning. Both forms of logic are essential for rational thought.
Yep, it's gonna be one of those posts again...
"Red" is an abstraction of a common feature recognized in different objects in the real world. "Colour" is an abstraction at a higher level. And so on... By "abstraction" I mean a noun that does not refer only to one unique object in the world, one that you can point at or hold in your hand.
In the world of NLP (which is close enough to the World of Null-A) abstractions are often treated in a particular way, as "nominalizations". In the context of personal changework, of removing past barriers to what you wanted to achieve or the way you wanted to be, this is very useful. If "fear" stops someone from being the person they want to be, perceiving "fear" (or "depression" or "anger") as an active process is a sudden (and disconcerting) change of viewpoint that allows change. If someone has an "irrational" phobia, asking them questions like "How do you know when to be afraid?" opens up sudden new possibilities.
But I really wanted to talk about logic and paradigms, and the way science changes, as we filter our world through new metaphors in order to understand it more.
Because "science" is a nominalization, that balances scepticism with an open mind (to paraphrase Carl Sagan). Every scientist is concerned with testable theories, and progress is partly defined by the theories that are thrown away.
No one needs the concept of phlogistons to model combustion, or vortices (as per Descartes) to model gravity -- they are outmoded metaphors or models. But even among the metaphors in current use, there's no single correct model (unified theory), and the things which are unexplained or lie at the boundary between two different theories are so often the puzzles that drive understanding forward.
Before Newton, time was not a "geometric" dimension in scientific models. Before Faraday, fields (of force) were not a core concept (although they were a vague metaphor to understanding), whereas since Faraday's time, physicists have "absorbed the concept of fields with their mother's milk", to quote Albert Einstein...
Here's a list of some important understandings which have arisen in my lifetime:
- from microfossils, evolution began 4 billion years ago (up to 1 billion years earlier than previously thought)
- stars have planetary systems (over 1700 such systems detected so far, with different observation methods that agree with each other -- previously, no one knew whether this sun was the only star with planets, now it's likely that planets are everywhere)
- symbiosis is as important as predator/prey relationships in evolution (The mitochondria in every cell of every animal (incl. human) species, the powerhouses of the cell, contain DNA that is nearly always -- not always, as most people think -- inherited from the mother. The nuclear DNA (half from each parent) is quite separate. It's now widely accepted that early unicellular animal life was the symbiotic pairing of two distinct species of bacteria, hence the two separate sets of DNA in all our cells.)
- quantum physics can be observed at the macroscopic level (the next huge leap forwards -- happening right now -- large collections of atoms are being put into quantum states that effectively make them a single quantum particle, and so the weirdness is about to be seen in large physical objects. Teleportation has already been achieved, in physics labs under verifiable and reproducible conditions.)
- I'm going to add neurolinguistic programming, which is just the beginning of various models that will have different names in the future, being powerfully verified by cognitive neuroscience now, such as: the 20th century discovery of mirror neurons (it's not news!) and the more recent discovery of the neural spatiotemporal grid (which I hypothesise is a hugely powerful mechanism, responsible for "timelines" and "submodalities" and other aspects of the way we structure our subjective experience of the world)
- emergent properties arise from complex systems regardless of the properties of the underlying substrate.
- human beings are dissipative structures thermodynamically, locally increasing complexity while obeying the second law of thermodynamics (Prigogine won the Nobel prize for this in 1976)
- black holes are real and there's a big one at the heart of our own galaxy (when I was an undergraduate, Prof. John Taylor visited and gave a talk on black holes, prompting one 3rd year student to stand up and say: "Do you seriously call yourself a physicist?")
- dark energy and dark matter, the latter being a codename for the huge majority of the mass in the universe, that is made up of something we can't see and whose nature we don't know. Talk about unknowns and boundaries!
And of course humanity will model reality in new ways in the future. Wolfram's book, A New Kind Of Science, is just one possible vision of mathematical models that don't use equations (they're replaced by local rules for cellular automata). What else haven't we thought of yet?
Because beyond that, Newtonian physics implied a metaphor that was the-Universe-as-clockwork, while current physics (and neuroscience in a sense) consider the-Universe-as-computer (Wheeler's "it from bit"), so in five centuries time, perhaps that metaphor will be quite outmoded. I wonder what the new ways of thinking will be?