...And, er, me... I'm attending the SFX Weekender event next Friday and Saturday. In particular, I'm doing my Q & A session (with massive confidence-boosting and tips for any unpublished writers) at 6 p.m. on Saturday 6th Feb. (I'm on after Richard Morgan and before Peter Hamilton.) So please come and see me, on what they're helpfully calling the Slaughtered Lambs Stage! Especially if you're a newbie writer.

Among the authors will also be China Miéville and Justina Robson. Will anyone notice us while Tom Baker and James Marsters are wafting past? If I wear a long scarf and a long leather coat and paint my nails black, will anyone notice...?

And now you can! Or you can just come and have a friendly chat... because I'm doing a signing at the Forbidden Planet megastore in London, on Friday 12th February.

At the store, the lovely staff are running a COMPETITION, and the winner gets to have a character bearing their name DIE A PAINFUL AND GRUESOME DEATH in Point, the sequel to Edge! What could be nicer?

And we all get to meet Paris-based Aliette de Bodard, the award-winning short fiction writer whose debut novel is appearing next week. It's an Aztec mystery/fantasy, so what I'm wondering is, whose novel has the most blood, hers or mine?

P.S. The UK publication of Absorption has been rescheduled for May 20th.  Only Edge is appearing in February. Official UK publication date is February 4th.

The first two chapters of EDGE are available at the Angry Robot website. Scroll down to the entry for Jan 18, and you'll find the downloadable pdf. Enjoy!!!

I'll be making a few appearances next month, at SFX Weekender and a couple of bookstores. Details soon. Come along and say hi!

Out next month, my first book as Thomas Blackthorne... and here's the cover. Does this stand out from the rest, or what? 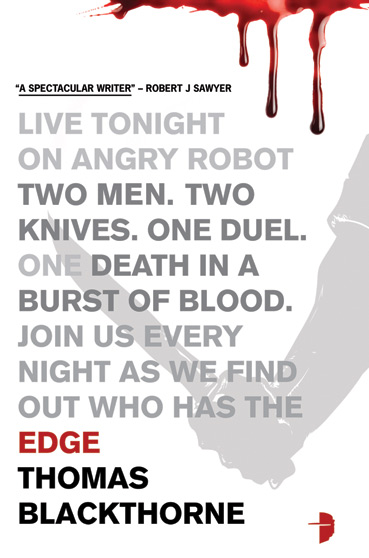 I told you it was a different kind of book!

So moving to Wales involved long-to-be-remembered sagas of driving through Arctic conditions with two noisy cats singing their disapproval all the way (and a 4 a.m. arrival in the valley), the heroic furniture removal guys battling through blizzards, and the slow unpacking of boxes. For weeks, the house resembled the warehouse at the end of Raiders of the Lost Ark. 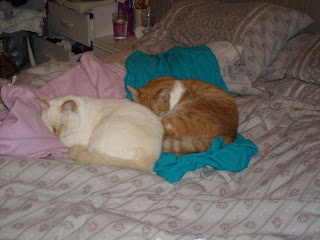 The cats, Nutmeg (aka Captain Bonkers) and Bonbon (aka Princess Bonbon, the most beautiful girl in the universe) have taken to the new house far better than hoped, with the exception of the Paddyzone, the part of the house they may not enter. There dwells the ferocious three-legged cat known as the Paddymonster, who was in the house before they got there, and intends to rend the intruders, given the tiniest chance. 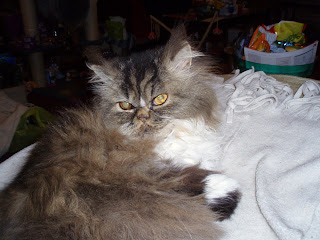 This weekend, we had our first visitors come to stay -- our pals Chris & Penny Hill -- and we all hiked up the valley (Chris showing his mettle in an uphill sprint) and into the forestry land across the peaks. There's this substance called fresh air that's missing from city life -- I knew there were good reasons for moving here. All was fine for the visitors; then the rains came down as Chris and Penny drove away.

We're not entirely settled yet, but getting there. Lotsa family here, which is great.