This will make sense only to television viewers in the UK - excluding those who confine themselves to properly intellectual programmes.

I seriously considered ringing in to the XFactor with a question for Louis Walsh, which would go like this: Louis, I'm 53 years old, I've got long hair, I've trained in karate since I was a teenager... and I can't sing a bloody note. Can you make me a star?

The bad news is my opportunity is history; the good news is, so is Wagner! No offence (especially since he's been missing his cats), but my money's on Matt all the way, with Cher in 2nd place.

I shall now resume my normal position of curmudgeonly disdain for populist telly... 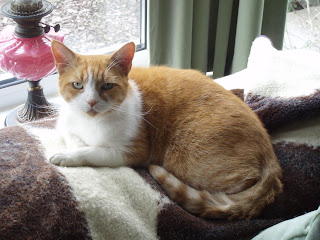 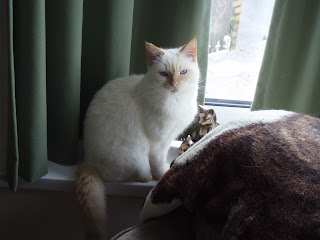 It's official: I'm to be Guest of Honour at next year's Novacon.

One cold Friday night in 1978, I wandered into my first con - Novacon 8, in the Holiday Inn, Birmingham. Anne McCaffrey was GoH. By 2a.m, it was just me'n'Annie propping up the bar: a turning point in my life.

Somehow 32 years have passed since then - 33 by next November. (Remind me to write faster.)

So you can understand that for me Novacon 41 will be hugely significant and an immense honour. I'll pull out all the stops to entertain everyone who's there. Please do come!

Snowfall. A Welsh valley looking like Switzerland. I jogged up to the mountains on a snow-covered track. And made a mental note to go shopping tomorrow and stock up on food - along with everyone else.

THE AUTHOR'S DEATH IS GROSSLY EXAGGERATED

This article in New Scientist predicts the death of sole authorship as digital tech forces writing to become collaborative. Yes, there are experiments in that direction; but I disagree. My comment is below the original article, and also right here:

Letting the readers prioritise story threads? I don't think so. This means collaborating in the first draft - which is usually unreadable. Most writers require at least three drafts (often many more) to produce something worth submitting to their publishers, at which point the editorial process begins. I don't think technology leads to art-by-committee. In the long term, it will bring creative powers back to individuals. When a single person can create CGI movies on a handheld device (or ubiquitous processors in smart buildings) then the novel will truly become something new, different and exciting.

Representatives of the International Monetary Fund, the European Commission and the European Central Bank are attempting to persuade the Irish Government to accept a handout of tens of billions of euros. The Irish Prime Minister Brian Cowen says, thanks a million, but no one needs a handout just now.

So look, Eurobanking-guys. If all that money's burning a hole in your pockets, just give it to me. I'll pop it in a savings account, earn interest and everything. Honest, you know... Just trying to help out.

Scientists in CERN have succeeded in trapping 38 atoms of anti-matter, long considered mere science fiction, but now clearly serious enough for us to mention here in the studio. Physicists believe that holding on to anti-hydrogen [pause for graphic of flying billiard balls with no labels and definitely no, like, equations] for a sixth of a second will reveal the secrets of the creation of the universe. But now, back to the major news story of the day: Speculation is rife as to what colour tie Prince William will wear on his wedding day. Over now to our royal correspondent...

Just back from Bristolcon, in the early hours of the morning. The friendliest con in the world. Da committee wuz wunderful: huge thanks to MEG, Jo Hall and Cheryl Morgan for putting on such a great event.

It was great to meet Mark Robinson (who gave me an idea for something I should put up on the website), fellow writers Michaela, Gareth D. Jones, Mike Powell, and listen to the talented singing of Talis Kimberley. We caught up with a bunch of old friends, including Alastair Reynolds, Jon Weir, Joe Abercrombie, Vince Doherty, Simon S, Andy Biglow, said quick hellos to Colin Harvey and Eugene Byrne, and loads more.

Juliet McKenna and I did a fight demo thing, with poor Joe (GoH-cum-crash test dummy) Abercrombie manfully holding the impact pad for me to whack kicks into, and to be Juliet's bendy toy, which was a far more painful experience. Joe is my hero. Juliet could whup Stephen Seagal's bottom. And thanks to Kevin (also a 2nd dan black belt) for being the 'randomly chosen' audience member who just happened to be able to whip powerful roundhouse kicks into the pad at any height.

Also, a fantastic way to finish my seventh year of blogging. This means I'm no longer made of the same atoms that were me during that first post. Is that cool, or what?

NOW YOU SEE ME!

Remember I'll be at Bristolcon this coming Saturday. Catch me any time, but in particular at these 3 times:

SPECIAL EFFECTS – FROM HARRYHAUSEN TO AVATAR: As little as five years ago, Empire Magazine predicted that James Cameron’s Avatar, then trapped in development hell, would never be realised because the technology to make it simply didn’t exist.

This year SFX guru Ray Harryhausen celebrated his 90th birthday and, in honour of these two events, Bristolcon is devoting a panel to the history of special effects in movies and TV, looking at how far they’ve come from the days of stop motion, wondering if more is actually better, and speculating on how far the art can be pushed in the future.

WRITING FIGHT SCENES:
We've all got drunk. But very few of us have been involved in a tavern brawl, fought hand to hand combat, faced down a barrage of ray guns or led a cavalry charge. Maybe as a result of this, writers frequently cite fight scenes as one of the hardest things to write. So we have martial artists/authors John Meaney and Juliet McKenna on hand to guide you through the mechanics of writing fight scenes, and maybe, if you’re lucky, demonstrate some moves on our other unsuspecting panellists…

As mentioned 2 posts back, Mrs Abercrombie gave me express permission to perpetrate violence on her husband's person during the panel. Plus he's just finished the book he was working on (Heroes), so if something goes a bit awry and he has to spend time convalescing, it shouldn't affect his schedule. Too much.

During the summer, Dave Clements of Imperial College organized a Science for Writers conference, which I attended and blogged about. On the first evening, most of the group dined together in a restaurant. Alastair Reynolds and I talked about writing SF when we were schoolkids. I think it was Dave who suggested an anthology - but it's OK, we're not doing that...

In my first three years of grammar school (for US readers: high school for the brighter kids), my English teachers would accept stories in lieu of essays. I recalled, for our dinner group, writing about either My Garden or The Lawnmower (probably the latter), and having a guy with a lawnmower crush a pocket universe lying in the grass, while inside that pocket universe, another lawnmower destroyed another pocket universe... And my submission for "The Salad Bowl" involved an assassin in a botanical garden.

There were others I didn't mention, including another riff on infinite recursion, plus a Lunar exploration thing, and others. Unfortunately, decades ago, my Mum threw out my old exercise books while tidying the house. All those, er, precious relics lost...

But wait, what is this? A previously unpublished Alastair Reynolds story in not one but two colours of crayon! Check it out, you hard SF fans.